First time director Neil Blomkamp, with the support of Peter Jackson, has created one of the summer’s most original and startling visions of extraterrestrials since the Sci-fi work of David Cronenberg.  Created on a scant 30 million dollar budget without any stars and a lead actor who had never acted in a film before, the story of aliens housed like the Jews in Lodz is compelling and engaging. 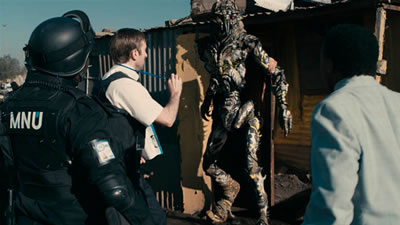 Scripted by the director and Terri Tatchell, the story plays out like a “mockumentary” married to a bizarre emotional drama.  Our lead protagonist, Wikus van der Merwe (Sharlto Copley), has been given the formidable task by his employer, MNU, of relocating the insect-like aliens to a new home by evicting them from District 9.  The whole operation is bungled so badly that a murderous riot erupts and Wikus becomes infected with an alien DNA which overcomes his own.  This dystopian vision is rendered with a high degree of verisimilitude by a seamless CGI which allows humans and aliens to interact not only with gestures and vocals but even with their eyes.  Lensed by DP Trent Opaloch in a faux verite style with the Red One camera, the film achieves production values that allow total immersion into this futuristic milieu. This film will achieve cult status and is one of the best of 2009.  I can’t wait to see District 10!