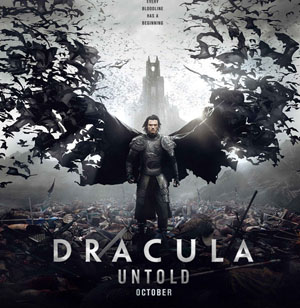 Luke Evans puts sexual energy and masculinity into the legend. It’s dark, moody and I’m ready for the sequel.

Finally, we have returned to the vampire as a man not some woozy man-child with a dream. Albeit, the first Dracula, according to this version, has been grossly misunderstood. He was forced into it.

Yet, if you think about it, vampires should be model citizens. After all, in this country, if you commit a heinous crime you could be sentenced to “Life – without the possibility of parole.” An imprisoned vampire would clear out our overburdened inmate population but that would hardly be grounds for an appeal.

DRACULA UNTOLD holds fast – as much as possible – to the historical events of Romanian Prince Vlad the Impaler (he was called “the Impaler” in his lifetime), who holds pride of place as the model for vampires.

Prince Vlad (gorgeous Luke Evans) is the loving husband, devoted father, and a kind and just ruler. As was the common practice – the ancient Romans were accustomed to take the sons of tributary princes and educate them at Rome, thus holding a security for the continued loyalty of the conquered nation – when Prince Vlad was ten years old, he was among the one thousand boys the Ottoman Empire demanded from his father to be trained as warriors to fight for the realm. Instead of being treated as a prince, he was forced to become a skilled soldier. He grew famous for his ruthlessness and impalements.

As is well-known, the favorite punishment of the historical Vlad III was impalement. This gruesome and excruciatingly painful way to die often involved driving a stake from the victim’s buttocks to his or her mouth. The stakes were oiled and smoothed so that death would come slowly. He is said to have killed as many as 100,000 in this fashion, often tens of thousands in a single day.

Years later, Prince Vlad, now ruling his kingdom, is again threatened by the Turks. The tribute of millions of silver coins is accepted but Sultan Mehmed II (Dominic Cooper) – as boys they trained and fought together – demands from Vlad his one thousand boys for military service. Prince Vlad has to answer to his passive-aggressive wife Mirena (Sarah Gadon). His wimpy, shy and meek son is not warrior material and has none of his father’s vicious fighting DNA.

In 1436, Vlad II Dracul ascended the throne of Wallachia. He was ousted in 1442 by rival factions but secured Ottoman support for his return by agreeing to pay tribute to the Sultan and also send his two legitimate sons, Vlad III and Radu, to the Ottoman court, to serve as hostages of his loyalty. Radu became a good friend of the sultan’s son, Mehmet II. Vlad developed a well-known hatred for Radu and for Mehmet II, who would later become the sultan.

There is only one way for Prince Vlad to keep his son – number 1,001 – from becoming a depraved killer. He has to strike a pact with a beast trapped in a cave. The beast is all alone and depressed. Everyone who stumbles upon his cave gets eaten, so he has no friends or guests. The beast makes Prince Vlad an offer. All Prince Vlad has to do is drink the beast’s blood and for three days he will be invulnerable to death, turn into a swarm of ten thousand killer bats and spout very huge wings. The caveat is that he will become ravenous for blood. If he drinks blood at any time during those three days, he will forever be a vampire.

The historical Vlad III often had the stakes arranged in various geometric patterns. The most common pattern was a ring of concentric circles in the outskirts of a city that was his target. The height of the spear indicated the rank of the victim. The decaying corpses were often left up for months. It was reported that an invading Turkish army turned back in fright when it encountered thousands of rotting corpses impaled on the banks of the Danube.

“To subdue the enemy without fighting is the acme of skill.” – Sun Tzu

Directed by Gary Shore and written by Matt Sazama and Burk Shapless (also co-writers with Alex Proyas on 2016’s GODS OF EGYPT), DRACULA UNTOLD is highly enjoyable. It’s tense and there is no wink at the audience. The screenwriters also cleverly introduce a character called Shkelgim (Zach McGowan) who shadows Prince Vlad and wants to serve him. Everyone, especially Evans, plays for real. This is a perfect vehicle to showcase Evans emotional range. His wardrobe – costume design by Ngila Dickson – requires special mention. Vlad’s brown leather coat should become a “must-have” fashion item. As the first feature film directed by Shore, it is a very good start.

A few of the special effects reminded me of TV’s The Stain. I did not see any flaws with the special effects. I saw DRACULA UNTOLD on an IMAX screen and want to see it again. Was Luke Evans seen for the role of Christian Grey? The only criticism I have is with the family, the underdeveloped, totally useless wife and son. His wife is played by a child-woman. The son of valiant warrior Prince Vlad is a crybaby clinging to his mother.

Regarding the famous portrait of Vlad the Impaler, which shows a strong regal face with prominent features and a dominant cold stare, his brother Radu was known as “Radu the Handsome”.