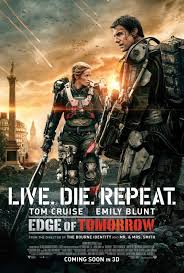 Terrific. Cruise oozes charisma and has real chemistry with Blunt.

The thing about megastar Tom Cruise is that you know he gets “first look” at every screenplay. If he wants to do an action sci-fi adventure, his agents see everything offered. Audiences expect the best from him and with EDGE OF TOMORROW Cruise delivers his star-quality charm.

EOT once again shows off the Cruise magnetism and the way only he can deliver a line that makes the audience cheer.

With the world quickly losing an invasion by an unknown alien race humans call Mimics, a special “super-soldier” army division, United Defense Force, is formed. Each soldier is encased in a 100 pound bulky armor suit.

Major William Cage (Cruise) is the PR face of the UDF and has been called in for a meeting with Gen. Brigham (Brendan Gleeson), the man in charge of the next planned “Normandy-style” assault. Brigham orders Cage to gear up and join the front lines. Cage is shocked – he’s never even held a gun. He’s just a figurehead. He’s never even been to boot camp. Brigham orders Cage arrested. When Cage tries to flee, he’s tasered and wakes up at the extraction point under Master Sergeant Farell’s (Bill Paxton) brigade and outfitted in body gear that makes an astronaut’s suit look like Sunday picnic wear. Cage does not have a clue how to turn his weaponry on. And no one bothers to tell him.

Along with hardened soldiers, Cage is immediately deployed to London and then a French beach. Human soldiers did have one victory against the Mimics because of the skill of the now-legendary warrior Rita (Emily Blunt). Cage passes Rita on the battlefield. When Cage pulls off one lucky blast from his body armor, he kills a Mimic. Splayed with the Mimic’s blood, Cage and Rita both die in the massacre.

Next thing Cage knows, like a really bad dream, he wakes up again where his unfortunate day began, at the extraction point. The same day’s events continue over and over again until Cage starts to know exactly what every soldier will say and what will happen. After repeating the same events ad nauseam, Cage starts to figure out what to do to avoid getting killed. But he still gets killed in the brutal mayhem of the massacre.

With repetition, Cage slowly figures out that he can change the outcome of the future but he doesn’t understand that Time – as humans know it – is just a concept. Time is cyclical. The Mimics are dealing in another time-space continuum – the universe is a hologram – and our “laws” do not apply to them. Cage has one moment on the battlefield that illuminates what is happening. Rita tells him to come find her when he wakes up. However, this is not how Rita’s scientific buddy, Dr. Carter (Noah Taylor), explains Cage’s state of repetitive causality. I think his explanation had something to do with the Mimics understanding the Ekpyrotic Universe theory – or not.

The screenplay was adapted from Hiroshi Sakurazaka’s novel “All You Need Is Kill”. Did the screenwriters, Christopher McQuarrie, Jez and John-Henry Butterworth, spot check Nietzsche’s idea of eternal recurrence? In Nietzsche’s concept of eternal recurrence, everything we do has extra weight, because it will happen again and again as history repeats, far in the future beyond our current experience. He summed it up saying: “In an infinite period of time, every possible combination would at some time be attained.”

As we expect from a Cruise-starrer, the entire production is exceptional. The screenplay is clever and there is a wonderful twist on the Cage-Mimic mind-meld. The film editing, cinematography and art direction are all first rate. Cruise has a genuine sexy moment with Blunt – who definitely holds her own. Blunt’s Rita is not just an accomplished warrior but a zealot. The director, Doug Liman, masterfully creates a huge landscape and, as he showed us so memorably with MR. & MRS. SMITH, he can direct superstars and bring their best talents forward.
Film Critic for FilmsInReview.com, LasVegasInformer.com, and FilmFestivalToday.com