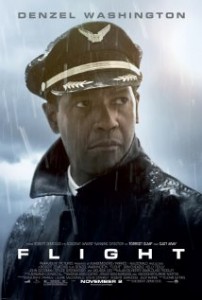 Flight” tells the story of an airline pilot portrayed by Denzel Washington named Whip Whitaker who saves a flight by skillfully crash landing a “broken” passenger jet in the midst of a complete mechanical malfunctioning. But this is not a tale of a pilot worthy of being another Chesley Sullenberger either. You see Whip is both an alcoholic and a drug addict living a hedonistic lifestyle after leaving behind the life of a family man.

The story begins with one of the most thrilling airline crash sequences ever filmed as the compromised pilot displays uncanny cool from the onset of the midair crisis. The plane goes into a dive and Whip did the unthinkable by flying the aircraft upside down and landing the plane in a pasture saving the lives of almost everyone on board. But, the NTSB investigation reveals that Whip was “legally drunk” while performing his duties. It is this dichotomy of hero versus criminal that leads us down a pathway to passionate humanity.

The script by John Gatins is poignant and moves deliberately to fill in the blanks about who really is the real Whit Whitaker. The cast includes Don Cheadle as a lawyer who tries to extricate Whip from the mess he’s gotten himself into.  John Goodman adds some weird comedy as a drug dealer while Kelly Reilly is another addict who adds another dimension to what eventually resolves into an old fashioned morality play.

“Flight” is a tour de force of acting virtuosity for Denzel Washington who often plays characters in crises.  This is one of the Oscar-winning actor’s best performances and deserves your attention.