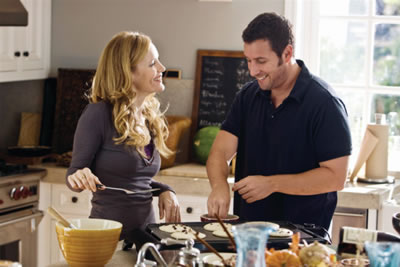 Director/ writer Judd Apatow has certainly captured Hollywood “A” list blockbuster territory in the past with “40 Year Old Virgin” and “Knocked Up” and was the force behind the wildly successful “Super Bad”.  With “Funny People”, his winning streak will probably be less pronounced as this mixture of comedy and drama lacks cohesion, brevity and clarity.

The film focuses on Adam Sandler’s fictional equivalent, George Simmons, as a 40ish comic superstar who has to face his own mortality with a diagnosis of a rare form of leukemia. There is a degree of emotional intimacy that is both touching and engaging in Sandler’s performance. The amusing and scatological banter among the three Jewish roommates: Ira, played by a trim Seth Rogen, Leo, a typically obese Jonah Hill and an obnoxious TV comedy star, Mark, performed by Jason Schwartzman provides many entertaining moments.

In fact, about three quarters of the film plays out quite nicely with a behind-the –scenes look at comedy club culture with helpful cameos from Paul Reiser, Sarah Silverman, Marshall Mathers(Eminem) and Ray Romano. It’s the last hour of Act Three where things unravel and do so at a lethargic pace.

George (Adam Sandler) miraculously gets a reprieve from his terminal illness and decides to reclaim the former love of his life, Laura, an unhappily married with children woman played by Leslie Mann.  It is this switch from George to Laura’s problems and, from Los Angeles to Marin County, that falters and ultimately drags down what had the promise of a comic masterwork. There is a somewhat confusing and soap- box opera quality that ensues between George and Laura’s Australian husband Clarke played by Eric Banna that ends with a less than satisfying fistfight. This ending, which Apatow, hoped would be cathartic for George leaves us feeling unsatisfied.

Lensing was performed by the brilliant Janusz Kaminski (DP of Schindler’s List) who captures moods of comedy and stress with great aplomb. The 146 minute running time is just too damn long!