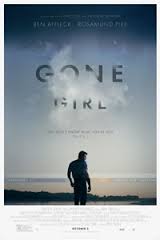 I’m not a fiction reader – I’m “reading” Max Tegmark’s Our Mathematical Universe: My Quest for the Ultimate Nature of Reality (it’s not a beach read) – but the hosannas for Gillian Flynn’s Gone Girl were hard to ignore. I read it. Gone Girl is a brilliantly executed novel.

After Gone Girl broke through my anti-fiction blockade, I cautiously read maybe one (at most two) books of popular fiction a year. But not one YA novel. After seeing the hypnotic UNDER THE SKIN, I read the book by Michel Faber. It is sensational and troubling. I want to take this opportunity to say Fifty Shades of Grey – the certified monster-hit – is poorly written. Anastasia is a vacuous, petulant bore.

So, like most of the fans of the novel, the fact that it was going to be put in David Fincher’s hands was a good sign. Bad sign? Ben Affleck was cast as Nick Dunne. This casting indicated that Affleck has power – the male lead in GONE GIRL was a coveted role. Could Affleck keep his arrogant posturing, the way he tightens his jaw and his alpha-male line readings from slipping into his Nick?

Fincher has directed many big stars and, with the exception of Robert Downey, Jr, all have happily submitted to his well-known demand for many multiple takes. (Except Robert Duval, who said he turned down a part in SE7EN perhaps unconsciously because of Fincher’s pendant for multiple takes. Duval called multiple-take directors such as Stanley Kubrick and Fincher the “enemy of actors”.)

According to GONE GIRL producer Ceán Chaffin, the average number of takes for each scene was closer to 50. By take 45, Affleck would have – through mere exhaustion – untied his grip on his facial muscles and relaxed his over-worked vocal cords.

In an interview with the New York Times during promotion for ZODIAC, Fincher addressed the excessive multiple-take regimen: “I hate earnestness in performance. Usually by Take 17 the earnestness is gone.”

As far as casting Rosemund Pike as Nick’s conniving wife Amy, Pike has the ice-cold face and demeanor of a Hollywood WASP she-demon. And she does not have the baggage of being a movie star.

Then came the rumor that the ending was going to be changed. This is code for “it’s got a Hollywood ending now.”

Recently unemployed New York magazine writer Nick Dunne (Affleck) has moved back to his hometown in Missouri to care for his cancer-stricken mother. With his wife Amy’s (Pike) money, he opens up a local bar with his twin sister Margo (Carrie Coon). The marriage has gone sour. But why exactly?

Nick is frustrated with his non-glamorous life and bored with his perfect wife. Her presence seems to insult him. She silently broadcasts his failure in life. The day of their fifth anniversary, Amy vanishes. It appears that there was a struggle in their house and Amy’s blood has been haphazardly wiped up.

The detective on the case, Rhoda Boney (Kim Dickens), and Officer Jim Gilpin (Patrick Fugit), immediately seize upon the most-often guilty party – the husband. And there are plenty of clues Amy left behind pointing to Nick.

Amy’s disappearance turns into a media sensation when Ellen Abbott (Missi Pyle) – channeling Nancy Grace in hairstyle, voice inflection, dress, dialogue – gets ahold of the case. The world’s media is parked outside the house and Nick is now a killer-celebrity. This is the most offensive characterization in the film. Who has Nancy Grace been wrong about? Drew Peterson, Scott Peterson, Josh Powell? Casey Anthony? Misty Croslin? Jodi Arias?

In truth, at least in the cases the media follows, a dead or missing wife means one thing: the husband did it. Especially if the wife is pregnant. There is always a girlfriend and money problems.

Nick does not know what happened to Amy but starts to consider the staged crime scene, her clues and diary were manufactured by her. He is forced to get a big-name, expensive lawyer, Tanner Bolt (Tyler Perry) and visit Amy’s obsessed former college boyfriend Desi Collings (Neil Patrick Harris). These are two very interesting and perfect casting choices by Fincher.

There is one emotion that is very hard to show on film – resentment. However, after many multiple takes – no doubt something he is unfamiliar with – Affleck perfectly shows Nick’s resentment, his frustrated belief in his unrecognized specialness, and his boiling rage over the media’s portrayal of him as a wife-killer.

One big distraction that makes GONE GIRL not perfect – alongside the Nancy Grace crucifixion – is the part of the movie when Pike does not look like herself. Pregnant during part of filming, her pregnancy is obvious and her face much more rounded. Then, she returns to her WASP, high check-boned face for the end of the film.

The ending stays true to the book. The screenplay by Gone Girl’s writer, Gillian Flynn, is accomplished. If a book is a mega-hit, the sale of the film’s rights – if you have a good lawyer, agent and publisher – usually is given to the author of the book. Thank God E.L. James did not write the screenplay for FIFTY SHADES OF GREY.

Director David Fincher – who cares he made new, unproved actress Rooney Mara do “about 99 takes” of her one scene in THE SOCIAL NETWORK? She won the part of Lisbeth Salander in Fincher’s THE GIRL WITH THE DRAGON TATTOO afterwards – faithfully captures the cruel dynamics of a ruined marriage. If only we saw why these two people hated each other.