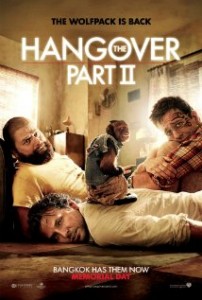 Director Todd Phillips and screenwriters Craig Mazin (“Superhero Movie, “Scary Movie#3”) and Scot Armstrong (“Starsky and Hutch”) have written another “investigative comedy” for our amusement.  This time, however, the excitement of experiencing a fresh original story is gone.  The latest iteration of the highest worldwide grossing R-rated comedy in Hollywood history ($467 million) is a variation on the “I can’t believe it’s happening again”. This time the wedding is scheduled to take place in Bangkok.  The groom to be is Stu, a dentist played by Ed Helms, who is vehemently disliked by the father of his Asian bride. Bradley Cooper’s character Phil has become dark and nasty, Zach Galifanakis’s Alan is a borderline sociopath with funny and outrageous actions and Ken Jeong’s gay gangster, Mr. Chow, is so full of himself that he becomes more obnoxious than funny. The newest character is the prodigy son, Teddy (Mason Lee) a cello master doing premed at Stanford. On their night out when everything goes wrong Teddy becomes the MIA who Mr. Chow relates as being taken by Bangkok (“Bangkok” has him”).

The sequel takes the temporary amnesia triggers assorted complications formula to a predictable ending. The funniest and most outrageous aspect of this film are the photos that accompany the ending credits.  This is a movie not worthy of your theater dollars.  It is a perfect movie for DVD or HBO.