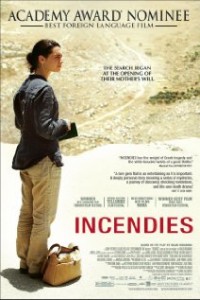 When Nawal Marwan’s (Lubna Azabal) Will is read by notary and friend Jean Lebel (Remy Girard) – who employed her for 18 years – the bitterness of her twin children, Jeanne (Mélissa Désormeaux-Poulin) and Simon (Maxim Gaudette), that they harbor toward their mother is evident.

The Will contains rather severe last wishes (to be buried naked with her face down!) and some directives before being laid to rest. There are two sealed envelopes for the twins to deliver – one to their assumed dead father and the other to an older brother they never knew about.

Simon wants nothing to do with her mother’s last wishes but Jeanne goes to the Middle East to search for answers. Nawal kept many troubling secrets.

INCENDIES slices episodes from Nawal’s life – before her life in Canada – with Jeanne’s quest to find out the truth that has never been revealed. Nawal, a Christian, was born and raised in rural Lebanon. When she becomes pregnant by a Muslim, her brothers kill him. She has shamed her family and her community. Her newborn is tattooed on the back of his ankle with three dots – a mark Nawal would look for the rest of her life – and immediately taken from her. She is sent away from her village and goes to the capital, where she becomes a student activist.

The depiction of the Lebanon war between Christian and Muslim fractions envelopes Nawal and she is not an innocent bystander but an assassin. And when the bus she is traveling in is stopped by Christians and a massacre follows, Nawal reveals she is not a Muslim (she boarded the bus hiding her crucifix) but a Christian. Her life is spared but the consequence is tragic. No side is shown as right. INCENDIES presents the savagery of the simmering, long held resentments between Christians and Muslims that finally explodes into a civil war.

Jeanne needs Simon and Lebel’s help. Both go to Lebanon where Lebel’s contacts bring forth the story of Nawal’s capture. She was held for years as a political prisoner and tortured. Nawal was known as the woman who sings.

Unlike other critically acclaimed foreign films – INCENDIES was nominated for an Academy Award – it will not be remade by Hollywood. The outcome presents one subject that is truly taboo in the U.S. The story of Nawal is shocking.

Why would Nawal want her children to know this truth? Why would she taint them for the rest of their lives? Couldn’t Lebel deliver the letters without the twins invovlement? While these questions go unanswered, INCEDNIES is a riveting thriller with complex characters and impressive performances.

Written and directed by Denis Villeneuve, INCENDIES is based on a play by Wajdi Mouawad. There are many horrific, disturbing scenes and an ending that is shocking. However, how is it that every Lebanese immigrant ends up at the same apartment complex hanging out around the pool?