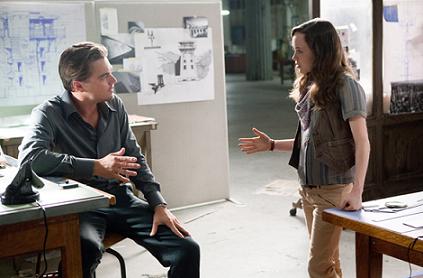 Dreams and movies have a long and storied history. But not since Alain Resnais’ controversial classic “Last Year At Marienbad” has a film plunged into the human subconscious with such bravado and style as “Inception”.  This first feature from director/screenwriter Christopher Nolan since the highly acclaimed “The Dark Knight” is a visually stunning $160 million dollar surreal thriller that does not follow the tenets of conventional narrative storytelling. The film examines  dreams on three principal levels: (1) As a melancholy reverie on the loss of a deep love (2) As a noir infused thriller and (3)As a reconstruction of the dream state encountered by human beings when they are trapped in  ultra-violent conditions.

Although difficult to comprehend at times the basic story is fairly straightforward: Dom Cobb (Leonardo DiCaprio) works on the black market stealing dreams and extracting secret information from his victims on a subconscious level. He’s hired by tycoon Saito (Ken Watanabe) to plant an idea (“an inception”) into business rival Fischer’s (Cillian Murphy) mind as the trigger for corporate sabotage. Saito promises Cobb – who’s wanted by US authorities – that if he completes the assignment he’ll fix things so that he can make it through immigration and go back to the U.S.A.

This two and   a half hour film unfolds at times like a moving version of M.C. Escher with amazing images that defy the laws of gravity in a “Matrix” like manner inducing an almost hypnotic state of mind. This clearly is a film that could be seen more than once as it is jam packed with images captured across four continents and six countries as one group of guys with guns chases another through corridors of hotels, rain infused streets and on snowmobiles likely found in a James Bond movie.

De Caprio renders a superb performance as does his factotum Joseph Gordon Levitt as Arthur.  Marion Cotillard’s haunting physiognomy makes the Cobb character’s depression all the more mysterious. But Ellen Page as a dream architect seems out of her league. Hans Zimmer’s score is the best he’s ever done.

Christopher Nolan has certainly come a long way.  We at FFT, remember his debut film “The Following” at Slamdance back in 1998.  He is now an “A” list director and a bona-fide member of the Billionaire Boys Club.  The big question is can a concept film like this one succeed in generating a new “fresh” franchise?  Warner Brothers is “double- down” on this one.