Director/ writer Quentin Tarantino credits his deliberate misspellings in the title of this violent fantasy, action adventure revisionist fairy tale to Jean Michel Basquiat, the first black American painter to become an international art superstar. The title also is a play upon director Enzo G. Castellari’s “B” 1978 Italian WWII picture who is honored by Tarantino with a bit part in this new incarnation. 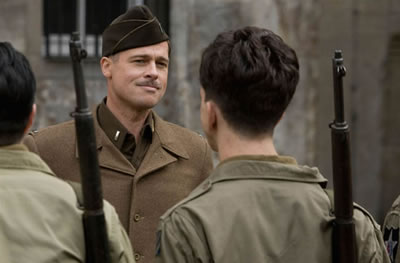 The film’s story is structured around a revenge plot wherein a Jewish family is brutally murdered by Nazis except for a young girl named Shosanna (Melanie Laurent), who escapes the massacre.

This sets up a fast paced and entertaining 152 minute Euro- colored art film which has characteristically Tarantino-esque brutal killing scenes that include human scalpings, mutilations and even baseball bat bashings that are gruesome and designed to have you marveling at their intricate choreography. As is usually the case in this type of story, the escaped sibling must grow up and plot to inflict harm upon her dastardly perpetrators.  And while we are allowing her time to achieve adulthood, the film reworks a “Dirty Dozen” style adventure scenario with a band of Jewish Nazi hunters led by a Southern Lt. Aldo Raine played over-the-top by Brad Pitt in a rather undistinguished role for the superstar. What makes this film sing, however, is an amazing tour de force performance from Christof Waltz as a renowned “Jew Hunter” Nazi military detective named Col. Hans Landa who fluently speaks four different languages and commands our respect as a shrewd investigator who perceives “Jews” as “rats that must be exterminated”.

The last of the five chapter structured film, titled “Operation Kino”,  provides a spectacular climactic scene that even includes Adolph Hitler and provides many visceral thrills fulfilling the revenge plot set up in the film’s opening.  Tarantino’s music choices avoid a traditional soundtrack by utilizing eight selections from the Ennio Morricone library and an inspired David Bowie tune.  The use of subtitled dialogue throughout the film will make it a more difficult sell to a youthful audience that only likes to read “tweets”.