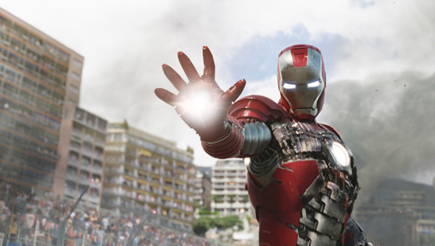 With the same director, Jon Favreau, and DP, Matthew Libatique, this Marvel Comic franchise falls way short on the wit and invention of the original.

Robert Downey delivers a solid Tony Stark wavering from scientist and entrepreneur to narcissist and drunk. “I have privatized world peace” he proclaims to the Senate Armed Services Committee which wants to seize his technology for the Pentagon. But this iteration feels pasted together to please the fan boys of Transformers. Its only saving grace is a ballsy performance from Mickey Rourke as Ivan Vanko, the sociopathic son of a Russian physicist and a weapon designer, who wants to avenge the wrongs done to his family by Stark’s father. But, the film is as confusing and frustrating as a “cluster fuck”. Besides Vanko, the second villain is played by Sam Rockwell who is a rival arms designer plotting to steal the Stark Industry’s proprietary technology. There is a less intimate and annoying Pepper Potts (Gwyneth Paltrow) and a hot new slinky heroine Black Widow (Scarlett Johannson) played like a version of the little girl in “Kick-Ass”. Throw in for insurance a superfluous role of Nick Fury played by Samuel L. Jackson in one of his “I don’t give a shit performances” and Tony’s buddy and confidant Lt. Col.”Rhodey Rhodes played by Don Cheadle (replacing Terrence Howard) and you can sense that screenwriter Justin Theroux threw in everything but the kitchen sink. As in the original, at the conclusion of the credits there is a “set-up” piece for Ironman 3.