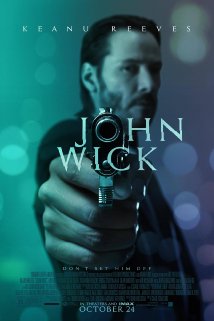 The brilliant frontrunner of the genre. Hail the return of Reeves back on top in this exciting “kill-them-all” aria. The soundtrack is fantastic. Keanu, stay with this franchise and away from romantic movies.

I’ve seen this scenario in over a hundred movies but screenwriters never explain it: The damaged hero (John Wick) is reluctantly pulled back into his former profession as an assassin. Here the villain is a wealthy Russian crime lord, Viggo Tarasov (Michael Nyqvist), with bodyguard-killers supervised by his aide-de-camp Avi (Dean Winters). We know Avi is well paid but what about the other guys? Does the job come with perks and a good starting salary? Who are these guys who willingly choose a job that has such a high probability of ending in death?

Compare them to gladiators? It’s not widely known but Ancient Rome’s gladiators rarely – if ever – died in the arena. They were too highly trained and valuable commodities to die. However, Hollywood’s psychopath crime lords have no problem finding a hundred guys to do battle till death.

The classic Hollywood treatment for this scenario – for me – would be from SCARFACE when Alejandro Sosa sent a hundred black jumpsuit-wearing men to Tony Montana’s mansion. This leads to Tony “Cocaine Face” Montana’s legendary rant to the assassins that ended with “Say hello to my little friend!”

But we never see the Hollywood crime lord making the deal – does the guy who actually kills the hero get a bonus? Because, if not, after watching 49 killer-comrades slaughtered, statistically, Number 50 should turn around and go home.

Keanu Reeves is back and with JOHN WICK he now reigns as the alpha-male of retired ruthless killers forced back to avenge a loved one. In Wick’s case it’s not only to retrieve his vintage sports car but to avenge the killing of his puppy.

Think the Terminator crying. John Wick is crying. After he married he quit his well-paid, famous job as the Underworld’s top assassin. His fame is so legendary that just mentioning his name causes crime lords to shake with fear. He has a dreaded nickname – The Booey Man. But what a world Wick inhabited! And here is what makes JOHN WICK so compelling and so much fun.

This is the underworld of elite assassins whose currency is a gold coin, perhaps a Krugerrand which is exactly one troy ounce. Or, considering this is a heavily Russian enterprise, it could be their gold coin, the Saint George the Victorious (but it comes in various weights). They have their very own hotel in New York City, “The Continental”. (I once spent a week in a KGB no-name hotel in Moscow. The citizenry never knew what the building was and no one asked any questions about it. If there was a food shortage, it was not at that hotel.) The “C” hotel has unimpeachable rules – no killing on the premises. The “C” has a hidden nightclub (entrance is one gold coin) and assassins do not need to carry weapons. The “C” is their Switzerland.

If you need a room at the “C” just give the front desk manager a gold coin. Need someone to get rid of the dead bodies? There’s a guy for that. It’s one gold coin per body.

After Wick’s wife (Bridget Moynahan) dies and his home is invaded by a bunch of Russian thugs – led by a crime lord’s son – he goes on a revenge spree. You see, they stole his priceless vintage Mustang and killed the puppy his wife had arranged to be sent to him after her death.

First, he goes to the chop-shop and asks Aureilo (John Leguizamo) about his car. He’s given the name of the thief/killer. It was stolen by Iosef Tarasov (Alfie Allen). When Viggo Tarasov finds out that the car his son jacked belonged to Wick, he knows there will be no negotiating with Wick – it’s personal. Wick goes to see an old colleague, Marcus (Willem Dafoe), who tells him Viggo put a $2 million bounty on him. So first Wick has to deal with his fellow assassins.

Wick is ready. He has a hidden cache of weapons and a suitcase filled with gold coins – just in case his marriage didn’t work out. He gets a room at the “C” and meets with the hotel’s owner, Winston (Ian McShane) and runs into a fellow assassin, Ms. Perkins (Adrianne Palicki).

Wick walks away after a mad ballet of bullets and the total destruction of the “C’s” nightclub and spa. Viggo has no choice but to agree to Wick’s demand. But Wick knows there will be a Patton’s army after him.

I want to know the particulars. I want to be shown the meeting. You’ve got your highly-trained payroll assassins but you need a few more. Do you use apprentice assassins? Do you go on the Deep Web for freelancers? Do they have to bring their own machine guns or are they provided?

Wick has one legend-making tour de force. He always shoots people in the head. If he sprayed someone with his machine gun, he goes back and summarily shoots them in the head. Sometimes twice. And he has a perfect, absolute reason for doing so. The assassins might be wearing bullet-proof armor. A dying man can still pull the trigger on a gun.

A man shot in the head does not get up.

Directed by Chad Stahelski and David Leitch, JOHN WICK was written by Derek Kolstad. But it is the stunts, sound department and special effects and visual effects that are outstanding. These stuntmen would have been revered and honored gladiators. The music by Tyler Bates and Joel J. Richard is fantastic. It enhances the already thrilling cinematography by Jonathan Sela.

Reeves has aged beautifully and shows emotional weight here. This is his venue and should be his second franchise. While THE MATRIX is a beloved classic, Neo has been eclipsed by John Wick.

See it once, then see it again to count the dead bodies.