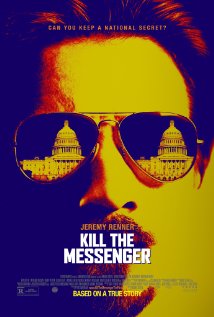 It’s his Watergate. He has a “Deep Throat”. Terrific thriller with a great performance by Renner but fails to bring the family’s lives to life.

KILL THE MESSENGER is based on the life of San Jose Mercury News reporter Gary Webb (Jeremy Renner). Working for a small-town newspaper of no significance, Webb stumbles onto a major story. It’s his Watergate. Webb meets Coral Baca (Paz Vega) the girlfriend of a suspected major drug kingpin, Rafael Cornejo (Aaron Farb). The wet-lipped, ridiculously sexy Coral complains that when the government seizures the property of suspected drug dealers, if they are found not guilty, they do not get their property back. Webb feels that this is not fair and he should expose this practice.

To entice Webb Coral gives him a transcript of Grand Jury testimony as a come-on. In his Grand Jury testimony, drug trafficker Danilo Blandon (Yul Vazquez) admitted to being recruited by the DEA to set up and replace drug kingpin “Freeway” Ricky Ross (Michael K. Williams).

With Blandon in Ross’s place, the DEA diverted cocaine money to Nicaragua’s Contras. This covert operation, which yielded a hotel suite filled only with money, was to supply the Contras in their quest to overthrow the Nicaraguan government. The cruel – but who cares? – by-product of this unorthodox illegal operation is the sudden explosion of crack cocaine flowing unimpeded into the U.S. The mammoth cocaine surge was devastating to the poorest communities.

I watch “Drugs, Inc.” on the National Geographic Channel. This series is extraordinary in that the producers get everyone from drug kingpins to the delivery guys on bikes on camera. Each episode is about several different cities across the U.S. Illegal drugs dominate every U.S. city. Sure, the interviewees are wearing masks but this allows for some astonishingly frank admissions about what they do and how much money they make. Successful dealers operate like the Mafia with a complex organizational structure. “Drugs, Inc.” also shows how they delude cocaine and heroin to make a great deal of money on an initial small investment. It’s a 200% tax-free profit! But they still live in hovels!

I wish my family life (or parents, husband, children) was just like the Hollywood version of Webb’s. Married nearly twenty years – they have a 17 year-old son and two younger children – Webb’s wife Sue (Rosemarie DeWitt) looks at him with regulation-coded Hollywood loving glances. They kiss, they laugh together, they make love, they appear blissfully happy. Sue is devoted to Gary and supports his work as an investigative reporter. They live in a really nice house. This depiction of an adoring wife who is hot, hot, hot for her husband is contractually mandated. In Webb’s life story, we find out that Cinderella didn’t marry her prince. But that comes later.

Webb’s obsession takes him to a prison in Managua, run by kingpin Meneses (Andy Garcia) who confirms everything. But not “for the record”.

Webb’s editor (Mary Elizabeth Winstead) and publisher (Oliver Platt) print his expose and the real heat from his story falls on his personal life. The management of the Los Angeles Times is furious that a little local newspaper got this story and task a legion of reporters to take apart Webb’s work line by line. All the government agencies deny his allegations. Webb does have his own “Deep Throat” – Fred Weil (Michael Sheen) who tells Webb a tsunami is coming his way. He warns Webb that he will become the story. His life will be destroyed and his career as a reporter finished.

Because of those “off the record” anonymous whistleblowers, Webb’s work came under intense criticism and his newspaper had to renounce Webb’s claims as unfounded.

Soon enough, Webb is reassigned to another local newspaper hours away. He has to live in a motel room. Now Sue questions their marriage. What happened seven years ago – which should have ended the marriage – did not. But Webb getting a desk job does.

The complexity of the Webb’s marriage is interesting but not the story – so we never get to know this highly emotional aspect of Webb’s life.

Renner gives an emotional, layered performance improving the screenplay’s complex cast of characters all holding small pieces of the puzzle. Do all drug kingpins follow the standard mold? Can you believe Meneses is introduced reading to a young boy?

What really happened that ended Webb’s life is gist for conspiracy theories which remain active today on the Internet. So why did the screenwriter, Peter Landesman leave it as a written postscript?