Hanks sabotages his and Roberts careers with this lazy, stupid disaster. 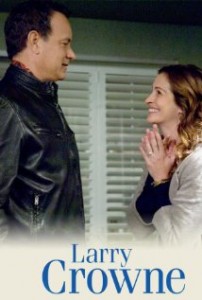 Hollywood is forgiving and keeps trumpeting the dead, rotting horses that are Shyamalan’s and Vardalos’s careers. They are invulnerable to criticism or box office receipts due to their long ago success. They keep making lousy films and no one cares!

I know Hanks produced MY BIG FAT GREEK WEDDING and made a lot of money. But why in the world did he co-write this awful screenplay with Vardalos?

Why did he want to direct this mess? It lunges along and crawls to the inevitable ending.

Does Nia have some embarrassing photos of Rita and Tom Hanks or maybe Weiner-like text messages from both of them? Without having any insider information, I keep making up my own theories.

Tom Hanks is a huge star. But it’s not good enough. Yes, it’s a worn-out cliché, but what Hanks really wants to do “is direct.” And he wants to direct non-acting Julia Roberts.

Larry Crowne (Hanks) is such a great employee of UMart that he behaves as if he built the damn business himself. He laid the bricks and painted the walls. So when management fires him because he does not have a college education, what does Larry do? Trade in his gas-guzzling car for a scooter and enrolls in a L.A. community college. The two classes he takes are public speaking and economics.

Larry spent 20 years in the Navy as a cook and years working the stock room at UMart. Why in the world would he take a public speaking class?

Larry’s public speaking instructor is Mercedes Tainot (Julia Roberts) and, as the case now with all cinematic teachers, she’s a miserable, unhappy instructor turning up to get her paycheck and go home to her porn-addicted husband (Bryan Cranston). Why does Larry need a public speaking class when he has been interacting – successfully – with the public for years? He’s been “Employee of the Month” many times over!

As soon as this middle-aged schlep walks on the college campus he meets gorgeous, young Talia (Gugu Mbatha-Raw) who flirts outrageously with him. Huh? Not only that, she immediately brings Larry into her world, dresses him, gets him a new haircut, de-clutters his house, and teaches him how to text. She’s the Mother Theresa of Community College misfits.

But first, Hanks does not direct Roberts but permits her to do her non-acting routine. America’s Sweetheart has grown sour. Hanks allows revered George Yakei to play economic professor Dr. Matsutani as a weird hybrid who makes contoured faces and growls at his class. Oh wait – Roberts’s growls at her class as well. Both teachers make threats on the first day of class challenging the students to stay.

With Larry all dolled up and a member of the scooter gang, he excels at Ms. Tainot’s idiot pop quizzes.

Can this movie get any worse? Yes, we can go back into Dr. Matsutani’s class and Takei’s insane laughter.

Since Hanks is the star of LARRY CROWNE, at the end of the movie, he’s got a George Clooney-like tan and much better lighting. He looks like a movie star leading man savior (without a job) ready to take Roberts’s across the threshold.