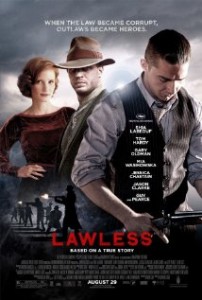 Aussie director John Hillcoat (The Road,The  Proposition), working from a screenplay he wrote with rocker-writer Nic Cave, has adapted story components copiously from a 2008 fact-based novel by Matt Bondurant (“The Wettest County in the World”) and crafted  a solid, gritty  prohibition/ action drama which has all the elements of a Western.

The film stars Tom Hardy (Dark Knight Rises) in an eloquent performance as Forrest Bondurant- the head of a family of bootleggers in the hills of Franklin County, Virginia in the 1920s. Forrest has two brawling brothers in hulking enforcer Howard (Jason Clarke) and eager to prove he’s a man- Jack (Shia LaBeouf). The film also features a wonderful Jessica Chastain (The Help) as the woman with a history and Mia Wasikowska (Jane Eyre) as a naïve young preacher’s daughter who is courted by Jack. The ubiquitous Gary Oldman has a minor role as a Chicago mobster while Guy Pearce owns the picture as a malignant villain and Special Deputy named Charlie Rakes.

Forrest, who speaks in low, laconic tones, perceives that running his moonshine business is his right as an American citizen.  For the Feds, and, particularly Charlie Rakes, it is his duty to shut down these hillbilly Blue Ridge Mountain bootleggers. The ensuing extreme visceral violence of throat slittings, brass- knuckle bashings and shootings between the two factions is startling and exciting.

One must recognize outstanding work from production designer Chris Kennedy and costumer Margot Wison which sets the rough poverty tone for this movie about victimless crime facing the immorality of lawmen gone amuck. But what keeps this film from being great is that we have seen this story before and we know how it will end way before the closing shots flicker off  the screen.