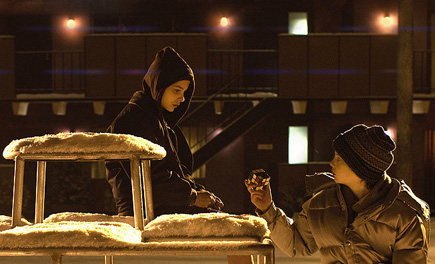 Director Matt Reeve (“Cloverfield”) has done a remarkable job adapting the Swedish vampire movie called “Let the Right One In” for English speaking audiences that disdain reading subtitles. The original was critically acclaimed (available on Blu-Ray) and genuinely frightening. This new version incorporates some changes but much of it faithfully reproduces the original shot for shot. The location obviously had to change. This time rather than suburban Sweden we are in ET friendly Las Alamos, New Mexico in 1983.

As in the original, the standard vampire genders are reversed. The story centers on a boy, as thin as a concentration camp victim, named Owen (played by Kodi Smit-Mcphee of “The Road”)the victim of schoolyard bullying and his demure new neighbor who’s now named Abby(Chloe Grace Moretz, of “Kick-Ass” fame). Ms. Moretz, who reminds me of a “Taxi Driver” –Jodi Foster is pitch perfect. Owen’s life is threatened by some nasty smart ass punks and Abby, like any self-respecting vampire, remains 12 years old for centuries and needs red blood to survive. Richard Jenkins, whose career has suddenly come to life, plays Abby’s mature colleague. With limited dialogue and kinetic action sequences this improbable young teenage couple remain loving and devoted in a grisly and ritualistic way. As vampire movies go this one should not be missed.

Posted in: Film Reviews
Tags: let me in, let the right one in, matt reeve, richard jenkins