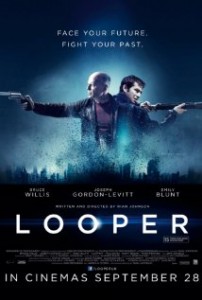 The director is quoted as saying: “For moviemakers time travel is tempting like candy, but if you work it too hard, it becomes like molasses.  In our movie, we use time travel to set up a situation that involves the characters, then time travel gets out of the way to let the action and characters play things out. Joe {Joseph Gordon Leavitt} really studied Bruce’s voice, his mannerisms. One of my best days on the set was shooting a fight scene between Joe and Bruce and watching Bruce coach Joe, like, ‘Now just shift your weight like this ’That was great”. But, I still wasn’t convinced that Bruce was an older Joe.  I think the overwhelming hair line differences between them are too great even though there were prosthetic adjustments of Joe’s familiar features.

In the film, Joe works within a ‘looping system” of remorseless killers led by the Rainmaker (Jeff Daniels) who runs a lucrative assassination business.  The way it works is they ship designated victims back in time some 30 years and employ contract killers called “loopers” to do the dirty work. The bound and hooded victim is sent through a “wormhole” and the “looper” shoots the helpless victim with the weapon of choice called a blunderbuss.  To Joe’s dismay the mob sends his future self back to kill-described as “closing the loop” and then the plot’s impossibilities become somewhat difficult to reconcile. The mystery that results raises questions about living in the moment versus living in the future. The film leaves one wondering in a good sort of way.  There is little doubt, however, of the talent of Rian Johnson.  With this film he becomes a force to watch in the future of storytelling.