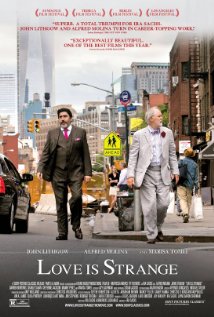 In the 1980s I lived in the West Village in a duplex on Bank Street. I know New York City. Ira Sachs, the director and co-writer (with Mauricio Zacharias) of LOVE IS STRANGE couldn’t possibly live in New York.

Ben (John Lithgow) a painter and his partner George (Alfred Molina) have been together for 39 years living in a small walk-up apartment in the West Village. They are getting married. A few weeks after the ceremony they have gathered their extended family and neighbors to make an announcement. George was fired from his position as a music teacher at a Catholic school because he married a man. No severance and no benefits. What kind of job – which he has held for 12 years – was this?

George does not go on unemployment.

If I am nitpicking, there is a lot more that bothered me about LOVE IS STRANGE.

Incredibly, Ben and George, who brought their apartment five years ago, have no savings. Even selling their apartment does not help. An apartment in the West Village? They should have made a killing. Instead, they only make $17,000. What about their down payment? Not knowing the reality of real estate in New York, how much do you think they had to put down? Ten percent of the asking price? Twenty percent? How did they ever get a mortgage if they had so little savings?

A dear friend of mine lived a few blocks away from me at the Westbeth Artists Housing. Westbeth is a nonprofit housing and commercial complex dedicated to providing affordable living and working space for artists and arts organizations in New York City. Ben should have put in an application to Westbeth 39 years ago!

Improbably this housing scenario is, it gets worse. They have to ask their family members and friends if they could stay with them while George looks for a job and they find another apartment. Dear friends, their downstairs neighbors, cops (Cheyenne Jackson and Manny Perez) take in George. He can sleep on their sofa since he has private music students in the city. George has no idea that this couple hold loud, pot parties every night!

They never heard the noise? They were never invited?

Ben goes to Brooklyn to stay at the townhouse of his nephew Elliot (Darren Burrows), his nephew’s writer wife Kate (Marisa Tomei) and their nasty piece of work teenager, Joey (Charlie Tahan). Joey has a constant companion, Vlad. Ben sleeps in the lower bunk in Joey’s room. Joey hates having Ben intrude on his privacy. A lot is suggested but never flushed out. Why is Darren never home? Is he having an affair? What’s up with Vlad? Why did Joey and Vlad steal books from the school library? Why didn’t they just take them out? Why is Kate so upset that Ben keeps bothering her all day long? Why doesn’t she take her tiny writer’s table into her big, empty bedroom and tell Ben she cannot be disturbed from 9 A.M. to 4 P.M.? Instead, she just gets mad.

Am I supposed to love this movie because Lithgow and Molina play gay men in love? There is nothing gay about either of them that informs us about their gay lifestyle. However, there is one concession I found true. I know a great deal about the gay lifestyle – like I said, I lived in New York City for many years.

I asked a gay friend of mine if he and his spouse – “spouse” is the new term for describing one’s partner – if they were monogamous. He looked at me and laughed. “No. We’re men, after all.”

Ben was not the faithful type and George understood his dalliances. They stayed together. For he was a man, after all.

For me, LOVE IS STRANGE was not realistic.