After watching MGP I forgive Butler his Hollywood rom-coms. Who knew an American could go to the Sudan, kill lots of rebels without any consequences, and become a living legend? 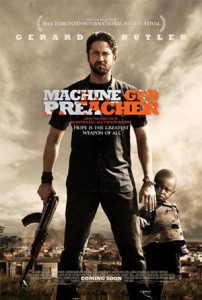 Gerald Butler does not compromise in depicting real life legend Sam Childers. For the pre-preacher part of MGP, I was scared of him.

When we first meet Childers, he’s being released from prison and picked up by his wife, Lynn (Michelle Monaghan). He has an odious mean streak, is a heroin user, a meth head, and a thief. Arriving at his trailer park home, he barely acknowledges his young daughter, Paige (Ryann Campos). He does breeze past his mother Daisy (Kathy Baker) and air kisses her hello.

Childers freaks out when Lynn tells him she has found God and has left her job as a stripper. Childers bolts and meets up with his friend Donnie (Michael Shannon) and gets a “taste” in the bathroom. Childers and Donnie go back to doing what they do best – causing bloody mayhem robbing drug dealers with shotguns.

Childers wears his colors and has a motorcycle. We breeze past his “affiliations”.

After picking up a deranged hitchhiker who welds a knife at Donnie’s throat, Childers brutally beats him to a pulp. The next morning, Childers, feeling kind of bad for leaving the guy bleeding profusely on the side of the road apparently dead, goes to church with Daisy, Lynn, and Paige. 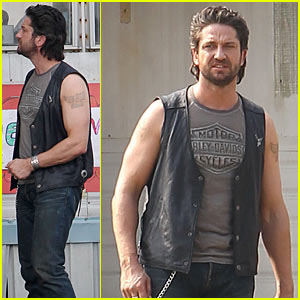 Instead of the reliable sudden, religious conversions of St. Paul, St. Augustine of Hippo, or my personal favorite, Martin Luther, Childers gets baptized and is told God has forgiven him all his sins! I was waiting for Childers to be “Slain in the Spirit” or at the very least, start speaking in tongues (Glossolalia). It’s a little understood sacred language.

Or gibberish. Pick one.

[Martin Luther’s sudden conversion: On 2 July 1505, Luther was on horseback during a thunderstorm and a lightning bolt struck near him as he was returning to university after a trip home. Terrified of death and divine judgment, he cried out in despair, “Help! Saint Anna, I will become a monk!” He came to view his cry for help as a vow he could never break.]

Miraculously, Childers has been reborn. No more drugs, drinking, or brutalizing drug dealers. He starts a construction business and always has his Bible handy. He builds a church and starts preaching. There is no Laying of the Hands at Childers’s church. Childers becomes a fiery preacher. He has done very bad things but God has forgiven him. 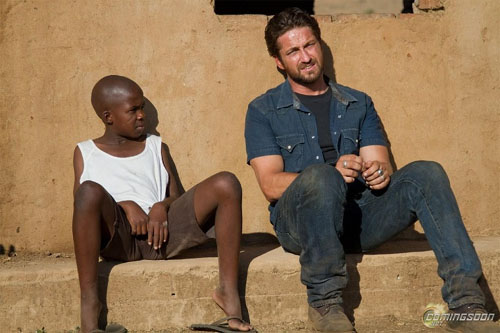 There was a palace coup and Yahweh was replaced by God the Father, who forgives. Just ask Him! Childers did and look what happened. Gerald Butler plays him in a movie about his life.

Briefly, of course, according to William James (1905) there is no difference between a state of ecstasy, and one of obsession. There are two conversion “paradigms” in the behavioral sciences of religion. The “classic” paradigm portrays conversions as occurring during distress, as being sudden and intense, and as highly self-transforming. According to James, these are the conversions of the “sick soul”.

This may explain what drove Sam Childers to his new addiction – humanitarian work.

Childers goes to Uganda to help build homes in remote villages. Filled with passion and a divine sense of calling, Childers returns to Pennsylvania a new man.

I’ve traveled through Uganda. I was told the witch doctor I wanted to meet was in the north. Thanks to the advice of our guides, I did not go. The Uganda I saw was a gorgeous, lush country. The capital, Kampala, is an emerging, international city. In the rural parts of Uganda, I met many church groups and individuals who were volunteering their time working in orphanages and helping the people. However, an unconventional war was going on.

Childers asks a Sudanese lieutenant, Deng (Souleymane Sy Savane), to take him to see what is really going on at Uganda’s border with Sudan. Shocked by what he sees, Childers feels he has been called by God to build an orphanage. It is his obsession.

Childers is fighting a guerrilla group, the Lord’s Resistance Army (LRA), led by Joseph Kony. In an article on Kony, dated April 10, 2008, a New York Times piece began thusly: “Joseph Kony is one of the most vilified rebel leaders on the planet. He stands accused of brainwashing countless children across northern Uganda, turning the girls into sex slaves and the boys into prepubescent killers. His so-called Christian movement, the Lord’s Resistance Army, has terrorized a corner of Africa for nearly 20 years, killing tens of thousands of people, burning down huts and hacking off lips. The fact that Mr. Kony, whose followers believe he is a prophet, rarely appears in public has only added to his brutal mystique.” 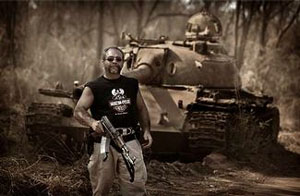 The heinous crimes of Kony’s LRA is shown here. In his 2009 memoir, “Another Man’s War: the True Story of One Man’s Battle to Save Children in the Sudan,” Childers’s (pictured: the real preacher in front of a tank) describes the well documented terrifying tactics of the LRA – they abduct children from their villages. They terrorize the children into obedience by disfiguring them with machetes, burning them alive, forcing them to disembowel their mothers, or to perform acts of cannibalism, among other atrocities.

Childers takes it upon himself to get a machine gun and start killing rebels. He goes out looking for them! And as his teenage daughter Paige (Madeline Carroll) screams at him, he is more interested in his orphans than his family. Why Lynn – who goes from stripper to beatific wife – puts up with Childers is not satisfactorily explained.

Kathy Baker’s role only involves nodding and smiling at Childers.

Joseph Kony is currently in hiding.

MGP, directed by Marc Forster and scripted by Jason Keller, is faithful to Childers’s life story. We know this because as the credits run we see the real Childers preaching and at his orphanage. We see him proudly shooting a machine gun.

Slimmed-down Butler, who is also one of the film’s executive producers, is mesmerizing, but Monaghan is not believable as a woman tough enough to put up with Childers. Shannon is always reliable.  No matter what I see Shannon in, I think of his amazing performance in BUG.
For an alternative radical view of Childers, called Machine Gun Menace, by Brett Keller, go to http://www.bdkeller.com/resources/who-is-sam-childers/