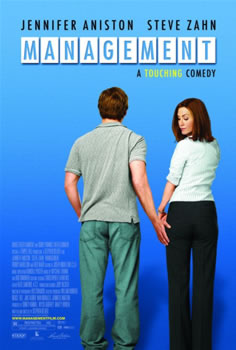 I’m always leery of any “independent” film with big names. Management – with a cast that includes Jennifer Aniston, Woody Harrelson, Steve Zahn and Fred Ward – appears to have all the trappings of a big budget comedy, except the budget itself, one would assume. It’s worth approaching this film with an open mind, though, even if you have a healthy dose of natural skepticism. Evaluate it on its own merits, and you will not walk away disappointed.

The premise of Management isn’t exactly complex. A hapless gump (Steve Zahn) works at his parents’ motel. Aniston, playing a corporate art sales rep, checks in for one night. Boy flips for girl and makes it his singular goal in life to win her over, spending every last dime he has – and earning more cash to fuel his romantic desire under unfortunate employment circumstances – to chase her around the country. Ultimately, a Buddhist monk guides him to clearer thinking, and of course, everything works out in the end.

Far from delivering profound messages or intricate character studies, Management is just plain fun. The jokes get dangerously close to slapsticks at times but never quite pass from absurdity to stupidity. The plot moves at a brisk pace, and the diversity of settings provides a series of new backgrounds for predictable laughs, often saving the humor from becoming tiresome.

If I sound harsh, it’s because dissecting Management doesn’t work. You have to step back, accept it as a whole and let yourself laugh. Humor without profundity is fine … which is perhaps the film’s most enduring lesson.

The director, Belber, confirmed my suspicions that there’s no such thing as an independent film with Jennifer Aniston during a question and answer session at the Florida Film Festival. Originally budgeted for $2 million, he’d only reveal that it was “much higher” when she signed on for the role of “Sue Claussen.” Additionally, he had to pull back some of the film’s raunchier jokes in order to make the star comfortable – which included cutting some of Harrelson’s funniest work. Keep your fingers crossed for extras on the DVD.

Honestly, working within Aniston’s constraints on the raunch probably helped the film creep up to the absurd/stupid line without crossing it, though the thought of Harrelson’s yogurt magnate’s high-octane exploits does intrigue the perpetual 15 year-old deep inside every man.

Is Management indy? Purists may be disappointed, but they usually are. This film was made to entertain. An audience that fails to embrace this purpose obviously misses the point.