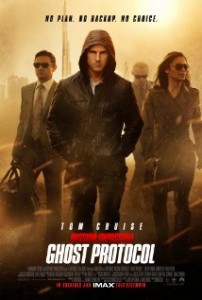 The brilliant Oscar-winning animation director Brad Bird (“The Incredibles”, “Ratatouille”, “The Iron Giant”) succeeds in his first foray into live action with this stylish adventure-action illusionist tent pole pic with a script by Adre Nemec and Josh Applebaum (vets of  J.J.Abrams’ spy series “Alias”). This fourth iteration of the franchise works so well because of the poignant visual and dramatic energy that advances the plot in every scene and the exotic and intriguing locations photographed in Panavision widescreen Imax with precision by the great Oscar winning DP Robert Elswit (“There Will Be Blood”).

Tom Cruise (“Ethan Hunt”) transcends his PR debacles by delivering his best performance in years as the star-producer of this unusually long (132 minutes) film. The outstanding actors around him do nothing but raise the bar higher for all involved.  Jeremy Renner is Brandt, a consultant who Ethan recognizes knows more than he admits and maybe being groomed to take-over if Mr. Cruise decides he’s had enough of these demanding films. Paula Patton as the alluring and indomitable Agent Jane Carter; Simon Pegg plays Benji Dunn, the nerdy IT guy; Michael Nyquist as Hendricks (code name “Cobalt”) the Russian evil nuclear extremist; Anil Kapoor (“Slumdog Millionaire”) as a seedy Mumbai billionaire; and most quixotically, Lisa Seydoux as a deadly for profit operative.

The story begins in Budapest with a shoot out and fevered pursuit that sees an agent murdered for his top-secret files, then moves to Moscow where the Impossible Missions Force break Ethan Hunt out of prison in a spectacular sequence quite like none you’ve ever seen and all before the title credits and iconic theme are dispensed. After reeking havoc at the Kremlin, The IMF team is disavowed by the US government and must work on its own.

From Moscow to Dubai to Mumbai, the stunts and thrills come at a record breaking pace. Among the espionage tools are a tiny eye camera that rests on top of the cornea like a contact lens uploading high definition images to a computer. The most stunning stuff comes in Dubai as. Hunt scales the outside of Burj Khalifa, the world’s tallest building, using only a pair of electronic grip gloves. This action and many more all are executed   with the expressed intent of finding a madman who plans to launch a missile that will send the world into nuclear war. It may be a generic plot but it is all wonderful fun and a popcorn movie that will leave you smiling as the end credits roll.