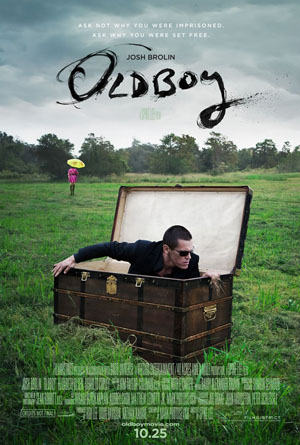 A brave, uncompromised remake of the cult original.

There have been four foreign films that I thought would never be remade in the U.S. Two have been re-made. One was the 2003 Japanese film BATTLE ROYALE which became the incredibly mega-huge THE HUNGER GAMES. I care that the mainstream media all but buried the glaring similarities between BATTLE ROYALE and THE HUNGER GAMES. Both started out as books. Battle Royale by Koushun Takami was published in 1999. The Hunger Games by Suzanne Collins came out in 2008.

Suzanne Collins, who spent two decades working in television and attended New York University (not exactly a backwater outpost), claimed she never heard of the Battle Royale book or movie prior to writing The Hunger Games. Oh, really? Collins said she came up with the ideas independently after watching late night television and clips of the Iraq War where children fought to the death for Saddem and bragging rights. The thinking was that no one ages 9 to 14 saw BATTLE ROYALE. It is reprehensible Collins does not acknowledge her debt to BATTLE ROYALE. Let’s hope Takami was compensated.

The other was OLDBOY, a Korean film, directed by Park Chan-wook. Who would have the nerve to bring the last taboo to American audiences and top it? Surprisingly, it is Spike Lee.

Will we ever see a re-make of A SERBIAN FILM and THE HUMAN CENTIPEDE? (Armando Iannucci, creator of HBO’s VEEP is a big fan. One character said: I’m eating everyone’s s**t. I’m like the last guy in a human centipede with this.”)

You learn a lot about a country’s collective subconscious by watching their films. And countries like Korea and Japan are strict hierarchical societies. Individuals in these types of societies are not equal. It is defined as the extent to which the less powerful members of institutions and organizations within a country expect and accept that power is distributed unequally. In South Korea this means that people accept a hierarchical order in which everybody has a place and which needs no further justification.

Joe Doucett (Josh Brolin) is an alcoholic advertising executive with great skills of persuasion but, in a scene that showcases his self-sabotage lifestyle, kills a done deal by making an aggressive pass at his potential client’s fiancé. Its 1993 and Doucett is a mean drunk. He passes out in a Chinatown gutter and wakes up in a windowless, cheap motel room.

For the next twenty years, he’s alone. Like a prison cell, he gets the same one meal a day and a bottle of vodka. He has a television set but no cable, no wifi, no phone. He watches in horror a news report that he is sought for killing his wife and leaving his toddler daughter. A few times a year he is drugged unconscious and shaved, given a haircut, and re-dressed. For the first decade he passively waits to find out who is behind his expensive captivity and what he did to deserve confinement. He makes a “karma list” of all the people he has harmed in his life. But who has the kind of money to pull off something like sinister? He starts working out, performing martial arts and plans his escape.

Finally, after 20 years he awakes from a Louis Vuitton trunk in a field. He has thousands of dollars on him and a cell phone. Starting a fight with a group of college football players, he now displays the killing strength and skill to go after and avenge his captor. He’s wounded in the brawl and goes to his oldest friend Chucky (Michael Imperioli) for help. Doucett is a wanted man, so Chucky takes him to Salvation Army Jean Simmons (Elizabeth Olsen) to mend his broken body.

It is Salvation Army Jean who makes the first move on a bare-chested Doucett. He hasn’t had sex in over 20 years. They fall in love.

Tracking the restaurant where his daily meal came from, he finds the warehouse where he was kept and watched over constantly. The gatekeeper of the warehouse is Chaney (Samuel L. Jackson), who wears his life story in his hairdo. There is a wall of monitors keeping watch over other men in motel prison cells.

Picking up a hammer, Doucett massacres twenty to thirty men wielding knives and baseball bats in one long, unbroken scene famously re-created and expanded from the original.

Doucett gets a call from his abductor (Sharlto Copley) asking “Why did I abduct you and why did I let you go?”

Doucett finally gets to meet his mega-billionaire abductor who has a weird accent and bizarre camouflaged appearance. He offers Doucett a winner-take-all proposal. If Doucett can answer his two questions in a certain length of time (the Ticking Clock Plot) he will give him a suitcase full of diamonds, a condo in Monaco, and he’ll shoot himself in the face.

This more elaborate remake fleshes out the story with bigger sets, sadistic torture, more extravagant killings and a sex scene. Brolin can do no wrong bringing his bitter, angry over-coating to good use.

I like Copley but his arch character, with such a pronounced effeminate air, is baffling. I haven’t a clue what his persona is saying to us except that this guy has way too much time on his hands. Copley seems to enjoy playing strange people we cannot identify with – he did such a role in ELYSIUM – and let’s hope he keeps at it and doesn’t try his hand at a romantic comedy.

If you like ultra-violence and a twisty plot, OLDBOY is a nicely re-imagined remake with a bigger budget, an interesting alternative ending, and a more elaborate hammer-killing scene.

Victoria Alexander All Access Granted, a new weekly column, begins January 6, 2014 and every Monday thereafter, on Las Vegas Informer www.lasvegas.informermg.com/. If you would like to be included on the advance private distribution list for a weekly preview, just send an email to masauu@aol.com.