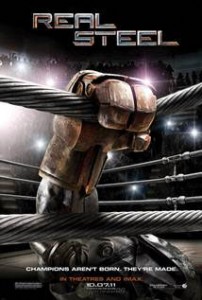 Charlie Kenton (Hugh Jackman) is not the kind of man you want as the father of your children. Maybe as an anonymous sperm donor, but not the day-to-day dad. Quickly abandoned by Charlie, she raises their son Max (Dakota Goyo) alone. No word from Charlie in eleven years.

Charlie never bothered even thinking of his son.

Charlie was once a professional boxer but now is a small-time promoter in the newest U.S. sporting craze, no-holds robot boxing. Its 2020 and human boxers, still not allowed to die in the ring, are passé.

Owners control their “bot” boxers with a big iPad with handles, directing the “bots” movements from outside the ring. Instead of blood, nuts and bolts fly.

Charlie is a promoter, manager and trainer. “Bots” have no “cut man” in their corner. They do not hear the chants of the crowd. There’s no ringside post-fight interview with HBO’s Larry Merchant.*

Charlie owes everybody money. He skips each town leaving behind debts and all responsibilities. He travels from underground venue to venue with his scrap-metal “bot” until, in Michigan at the famed Crash Palace, his “bot” is demolished.

Charlie tells his erstwhile girlfriend, Bailey (Evangeline Lilly), who runs a “bot” warehouse that he needs $50,000 for a new “bot”. Bailey loves Charlie but knows he’s a loser. 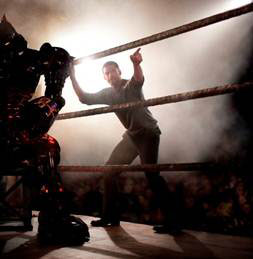 Charlie’s ex-wife dies leaving 11-year old Max. Her sister, (Hope Davis), married to a wealthy man, wants to adopt Max. Her husband (James Reborn) will pay Charlie $100,000 for the kid, with a $50,000 down payment. All Charlie has to do is keep Max for 2 months while they go off to Europe on vacation.

Sound familiar? The rest of the movie is predictable even down to the now-mandatory Spielbergian touches.

When Steven Spielberg is attached to your movie, here as an executive producer, certain mystico-awesome shots of Max must be included.

Max is a typical kid who plays “bot boxing” video games all the time. He’s also a mechanic, technician, boxing strategist and a theoretical physicist. And, most importantly, a hip-hop dancer. He never whines, needs to go to the bathroom, or demands toys.

Max never mentions he just lost his mother. Max never says he misses his mom. Charlie never asks about her.

I know, I know, everybody dies (except Larry Merchant, Rupert Murdoch, and Regis).

With the $50,000 in cash for selling Max (he signed the papers!), Charlie buys a famous “bot” boxer just off a championship tour of Asia. 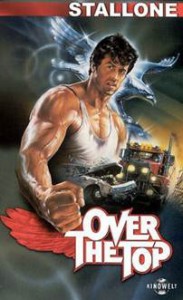 Didn’t I see this movie in 1987? It was the roundly panned OVER THE TOP. IMDB’s plot summary for OVER THE TOP: “Lincoln Hawk (Stallone) is a struggling trucker who’s trying to rebuild his life. After the death of his wife, he tries to make amends with his son who he left behind years earlier. Upon their first meeting, his son doesn’t think too highly of him until he enters the nation-wide arm wrestling competition in Las Vegas.”

Based on a short story by Richard Matheson, REAL STEEL was scripted by John Gatins, Shawn Levy and Richard Mathis. It is directed by Levy per directives from DREAMWORKS and it shows.

I squirmed in my seat, but the preview audience loved it. Jackman is playing a down-on-his-luck, self-centered, egotistical character. But, he’s got charm so that’s thrown in the mix. And you know he’s going to love Max and not abandon him a second time. Goyo is terrific. He’s emotional and sensitive and can really act. He’s no Nicole Kidman opposite Jackman. Jackman has his work cut out for him if he signs on the REAL STEEL 2.

DreamWorks is so confident REAL STEEL is going to be a huge hit that the studio has already commissioned John Gatins to start on the second installment. 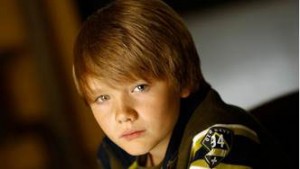 *I was at the MGM Grand to see Cirque du Soliel’s long-running KÀ for the third time the night of the Mayweather-Ortiz title fight. The “escorts” were out in full force. (What is in those tiny handbags they all carry? Just so you know, I am told the contents are 2 tabs of Viagra, 2 condoms, and handiwipes. Lugging a huge handbag distracts from the tiny, skin-tight dress.) I followed the intense HBO coverage of the run-up to the fight. The controversial fourth round featured a head butt by Ortiz followed by two quick shots by Mayweather while Ortiz had his hands down. 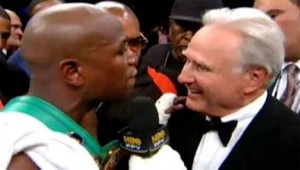 After demanding HBO fire Merchant, Mayweather said: “You don’t know [anything] about boxing,” Mayweather told Merchant, who has been called the greatest boxing TV commentator ever. “You ain’t [anything].”

“What are you talking about?” Merchant replied. “I wish I was 50 years younger and I’d kick your ass.”