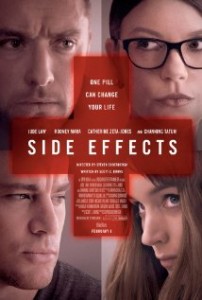 Director/auteur Steven Soderbergh has declared effusively “Side Effects” will be his last feature film. What a pity for the film art as this psycho-pharmacological thriller is one of his best films to date.  It twists and turns and surprises you in ways you just could never imagine. Soderbergh who shoots and edits most of his films brings the spirit and style of Hitchcock’s “Spellbound” to the 21st Century.

The film features Roony Mara and Jude Law. Mara plays Emily Taylor, a mentally disturbed woman who suffers from severe depression and a forlorn demeanor.  Law is a psychiatrist named Jonathan Banks who exudes a caring and pragmatic personality, Channing Tatum is Martin, Emily’s husband, who has just been released from prison for insider trading and is often out seeking gainful employment.

The film, whose screenplay was written by Scott Z. Burns (“Contagion”), weaves a story about a world where ticking bomb suspense is laced with pill taking of antidepressants (selective serotonin reuptake inhibitors, SSRIs) with dire warnings of side effects. We hear familiar names such as Effexor, Xanax, and Zoloft and a new revolutionary drug called Ablixa (“Take Back Tomorrow”) which is actually fictional. Google its name and get a real website that promotes the pic in a highly unusual way.

When Emily’s mood and shocking behavior enters the realm of criminal behavior the film explores issues of responsibility.  Who is responsible for a drug which exacerbates a sick mind?  Does the medical doctor who prescribes a drug assume liability for the actions of his/her patient?  These and other issues make a consistently entertaining film which is carried to a satisfying conclusion. The acting of all is excellent but the true breakthrough performance belongs to Roony Mara who exhibits a range of performance which is remarkable in its ability to convey emotion.

“Side Effects” is the first significant film released nationwide of the New Year.