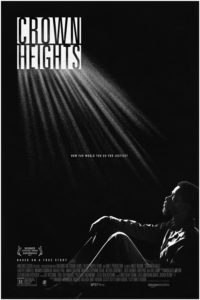 With a solid cast and a mostly strong script, Crown Heights delivers the dramatic goods in this riveting tale of a man imprisoned for a crime he did not commit. Based on the true story of Colin Warner, who spent 21 years in jail before being exonerated in 2001, the film stars Lakeith Stanfield (Get Out) as Warner. Arrested for murder and convicted without a shred of physical evidence, Warner eventually numbs himself to the pain of his incarceration, though not without struggle. As he tells a visitor at one point: “Most of these prisoners know deep down they put themselves here. I don’t have that comfort.” Indeed. Innocence is a lonely state.

The film begins in the titular Brooklyn neighborhood of Crown Heights, home to many Caribbean islanders, amongst them Warner and his family. He’s a happy-go-lucky guy, more or less, and not above the occasional petty crime, as we see when he steals a car in an opening sequence. But a killer he is not, and though he pays no penalty for his actual misdeed, he soon finds himself on the wrong side of a bull-headed prosecution, misidentified by a witness as an accomplice to a shooting. As a moving parable about our uneven justice system, which unfairly targets people of color, Crown Heights both enrages and engages. If a little too on-the-nose, at times, and occasionally clunky in its plot details, it stills works as drama, thanks in no small part to Stanfield and his co-stars.

One of the techniques writer/director Matt Ruskin (Booster) uses to emphasize the often-misguided ideological approach to crime prevention is his repeated inclusion, as the years go by, of various politicians on the radio and TV discussing their plans to jail criminals. First we hear, in 1980, New York Mayor Ed Koch, followed by Ronald Reagan, then Bush and Clinton, and finally New York Governor George Pataki. The men change, the message doesn’t: longer sentences, less parole.

And all the while, Warner rots in prison, repeating to himself, just before he opens his eyes in the morning, “Please don’t let it be a cell.” When, finally, that prayer is answered, it is thanks to the unending efforts of the friends who have refused to abandon him. To paraphrase what the angel Clarence writes to George Bailey at the end of Frank Capra’s 1946 It’s a Wonderful Life, “No man is alone who has friends.” As harrowing as Warner’s ordeal may have been – and the film makes clear that it was – at least he had that. Crown Heights may wear its heart on its sleeve, but it’s a good heart, and well worth loving.