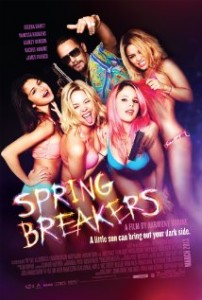 Director /writer Harmony Korine (“Kids”, “Gummo”) makes a feature film that transcends realism about college girls who wish to escape the boredom of their “Spring Break”. The four young women-Faith (Selena Gomez), Candy (Vanessa Hudgens), Brit (Ashley Benson), Cotty (Rachel Korine-the director’s wife)-go on a psychotic rampage that starts with robbery and continues into the realm of sexualized violence. “I wanted this film to feel like a fever dream, where you are dancing in and out of logic”, Korine told Filmmaker Magazine And, in that regard, the film succeeds as a surreal fantasy. But,  its real surprise is that it stars two graduates of the Disney Channel machine: Selena Gomez and Vanessa Hudgens as bikini –clad, lawbreaking girls, in their early 20s, gone wild. For the two this film will change-up their acting career trajectory for good.

The journey to the Mecca of Spring Break destinations, St. Petersburg, Florida, leads them to jail and eventual release to a drug dealer and gun- toting, corn-rowed gangster  named Alien(James Franco). who is pitch perfect in bejeweled teeth and a Southern hip-hop drawl. {based on performance artist Riff Raff aka Jody Highroller}.

Faith returns home but the other girls are seduced by Alien and join him on a robbery spree that ends in a dance and sexual tryst with the accompaniment of Britney Spears’ “Everytime”. The soundtrack is a blend of a young electronic musician named Skrillex and drummer composer Cliff Martinez, who recently scored “Drive” (2011).  It works remarkably well and makes the movie feel often like a long-form music video.  Also, I would be remiss if I did not praise the slow motion 35mm by DP Benoit Debie which splashes color and kinetics in a sensory pleasing manner as the orgiastic activities unspool on the screen.

“Spring Breakers” updates the evolution of the fallen teen idol for the 21st Century and depending upon its success at the box office could break Harmony Korine out of his esoteric indie niche and into the big time.  But don’t count on it.