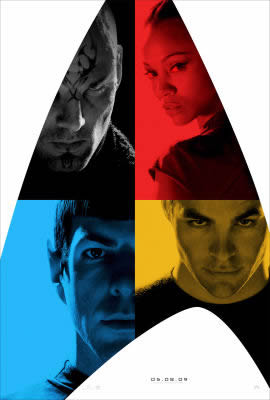 The new “Star Trek” will be a blockbuster for Paramount and deservedly. Director J.J. Abrams has brought this franchise “back from the dead” with this beautifully crafted movie which moves along at warp speed.

The film might be described as a sort of prequel as it goes back in time to provide fans with a fascinating back-story focusing on the tangled relationship between the First Officer Spock and James Tiberius Kirk.

Zachary Quinto plays the young Spock with the cool detachment that comes from embracing Vulcan logic. The adroit script by Roberto Orci and Alex Kurtzman introduces the crew of USS Enterprise with care and panache. The great Eric Bana plays the Romulan villain known as Captain Nero providing the plot with the tension that only a truly evil and scheming character can deliver. And no Star Wars revival would be complete without a cameo from Leonard Nimoy who plays Spock Prime giving the movie some added heart and soul. Kudos to all the special effects houses, and, in particular, Industrial Light and Magic. There is an IMAX version of this release and we at FFT strongly urge you see it that way.