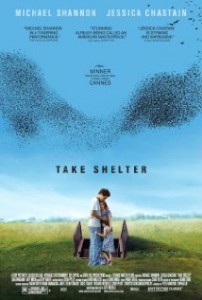 Writer/director Jeff Nichols’ sophomore effort is a stunning and revelatory movie with performances from the lead actors of Oscar-worthy caliber. Michael Shannon plays Curtis LaForche, a young husband and father who lives in a small-town with his wife (played by Jessica Chastain) and his hearing impaired six year old daughter Hannah (Tova Stewart). Chastain who seems to be everywhere this year (“Tree of Life”, “The Help”) gives another worthy effort.  But Michael Shannon’s performance is the best of his career and is such a towering achievement that it raises the level of everyone else in this film.

Curtis is a home-owner and makes a living that provides for his family’s needs. But he has disturbing dreams and premonitions that lead him to believe that a disaster is going to occur soon that will wipe him and his family off the face of the earth.  Worse still, he may be developing mental illness, which runs in Curtis’s family. (His mother developed schizophrenia in her 30s.)  So Curtis begins preparing a shelter from the storm of his nightmares that he just knows is going to materialize in reality and bear down upon him and his family.

Part of the strength of this film is Adam Stone’s amazing cinematography which expresses the dizzying state of Curtis’s illusionary mind with saturated colors and swirls of light. The edge of sanity plays out against the vivid depiction of small town life and Curtis’s worker acquaintances in construction, banking and health care.  The original score by David Wingo translates the uneasiness of this dark and foreboding tale with scary notes, chords and tones that set us up for a climax which will astound you.  Of all the films at Sundance 11 that stayed in my head this one was by far the most unique and compelling. With this film, Jeff Nichols has arrived as a filmmaker of note!