What’s next? A movie about people watching TV? 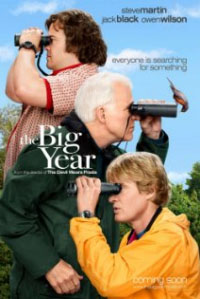 Birding is the fastest-growing outdoor activity in America. According to a survey by the U.S. Fish and Wildlife Service, 51.3 million Americans report that they watch birds.

I suspect this was the sole pitch for making THE BIG YEAR.

Bird watching is easy. All you have to do is go outside! Birding is another matter. It is not a cheap sport.

I never go outdoors unless I am in a country heading for a civil war.

I have been on several African safaris and, instead of concentrating on The Big Five (lion, African elephant, cape buffalo, leopard and rhinoceros), there are always a few “birders” along who must be served. They bring their Bird Bible and the guides always stop to point out birds. Safari guides are master birders. On one safari, we were given a booklet with the names of every bird in the country to tick off.
The problem with bird watching – in my opinion – is this: They are always flying off or sitting high up in trees. You can never get close to birds. You really need a telescope to even see them. 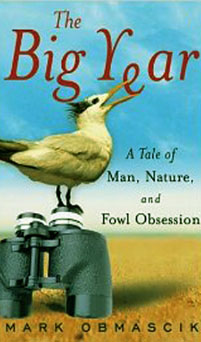 The Big Year is an informal competition among birders to see who can see or hear the largest number of species of birds within a single calendar year and within a specific geographical area. “Informal” means it is a competition based on your word. There is no requirement that you take a photo of yourself next to the bird with a date stamp.

(Currently, Colorado birder John Vanderpoel is completing a big year for 2011. He passed 720 species on October 1 after spotting a Eurasian Bullfinch. Vanderpoel is considered a threat to Sandy Komito’s big year record of 745 species, and was reportedly the fastest birder on record to reach 700 species in a year.)

THE BIG YEAR is based on Mark Obmascik’s 1998 book The Big Year: A Tale of Man, Nature, and Fowl Obsession.

Kenny Bostick (Owen Wilson) is the reigning king of birders. He holds The Big Year record. He’s the man to beat. A rich contractor, Kenny was a beautiful wife, Jessica (Rosamund Pike) who is trying to get pregnant using IVF. Brad Harris (Jack Black), who narratives the movie, is an unhappy divorced man with a lousy, dead end job. His bird watching obsession killed his marriage. Or at least that is what he thinks. Stu Preissler (Steve Martin) is a billionaire with an adoring wife Edith (JoBeth Williams) and two fawning idiot employees, Jim (Kevin Pollak) and Barry (Joel McHale). Jim and Barry’s role in life is to run after Stu begging him to make decisions concerning his empire. Stu is only interested in finding, as Jim keeps saying, “those damn birds”.

It’s a numbers game. If you do not have a job or responsibilities, and have money to travel all over the U.S., have contacts charting migration patterns, a travel agent making hotel reservations and arranging transportation, you do not do The Big Year.

Alpha birder Kenny is feared in the birding “community”. He knows all the tricks to keep other birders away from spotting birds. Brad has a unique advantage: He can identify birds by their calls. Stu’s advantage is he has money.

Brad is using a credit card from his mother (Dianne Wiest). His disapproving father (Brian Dennehy) gives him “The Real World” speech before he takes off on his vision quest.

Brad teams up with Stu as they race all over the U.S. hunting birds. It is an adventure but we never really understand the reason for the passion.

At least walking the 800km of the “El Camino de Santiago de Compostela” is a spiritual pilgrimage.

Directed by David Frankel, with a screenplay by Howard Franklin, THE BIG YEAR is a comedy that is not funny. There is a lot of running around as the numbers of the three competitors go up. The enormous problems of doing The Big Year – the logistics involved – are not shown.

Come on, there must be guides one can hire to bump up your score. You would think Stu would take along an assistant.

The movie is packed with small roles by stars, doing a day or two. Nice work if you can get it.

There is too much frantic Jack Black. “Less is more”, as the saying goes, should apply to all his roles. Martin is so low key, he’s playing the part of a saint, not a man who has successfully and no doubt, ruthlessly, built an empire from his garage. Wilson is his arrogant, charming self.

Wilson should stop making bad movies and start doing some serious acting. His brother, Luke Wilson, is now on TV. Is this Owen’s future?