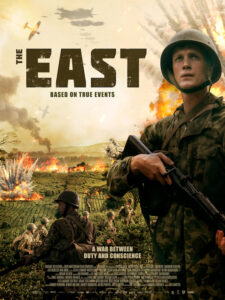 Just when you thought that the various stories and perspectives of World War II war movies had been exhausted comes director Jim Taihuttu (Wolf) with his latest feature film, based on the Dutch occupation of Indonesia towards the tail end of the conflict. The story follows Johan de Vries (Martijn Lakemeier, Winter in Wartime), who joins the Dutch army as they venture into Indonesia for the first time since Japan and Britain retreated from the country. Johan soon learns that he and his battalion may not be seen as the heroes they’re depicted to be. But when he gains the opportunity to join an elite squad, led by the ruthless Commander Raymond Westerling (Marwan Kenzari, Reckless), Johan must truly decide whether he’s in favor of his country’s objectives or against them.

Overall, The East provides a fantastic story and character arc, as we witness Johan go from a curious, somewhat jovial cadet looking for sex, drink and the occasional street brawl to seeing himself and his battalion as gods among men compared to the Indonesian population. His particular interest in a woman named Myra (Putri Ayudya) fuels an overwhelming confidence as Johan starts to settle into the country. At one point, Johan even becomes a cruel, vengeful man, himself. But as things start to turn incredibly violent and unrelenting for the Indonesians at the hands of the Dutch (claiming they are fighting an insurrection that we never truly see), Johan starts to return full circle to uncertainty, finding himself pitted against insurmountable odds.

The overall concept is quite a unique, seemingly untold narrative depicting smaller scale events during WWII. The setting and story create a very specific war experience and fully embrace the tense dynamic between Dutch and Indonesian people at the time, as well as some of the atrocities that took place. Quite often, Taihuttu delves into very Vietnam War-esque tones, as troops turn on citizens in violent, unprovoked ways.

Unfortunately, The East takes far too long to get its message across, saddled with an ineffective pacing that, while attempting to be in real time, slows down the narrative. The writing relies very heavily on flashing Johan’s life both forward and backward, which does the story no credit. Eliminating any jumps in time would almost indefinitely give The East a more cohesive, steadfast rhythm, as we already have a tremendous amount of character study for Johan without needlessly jumping in and out of the main action (and into some inexplicable irrelevant point, at that).

While The East may sometimes challenge the viewer to stay awake, I nevertheless applaud Taihuttu for bringing to light a fresh perspective on the cinematic World War II lore. Towards the end, there is even a quaint homage to The Lord of the Flies. Alas, Taihuttu throws one last flash-forward into his film, thus making the final image confusing, tragic, and otherwise unearned. With so much story to tell in his present-day setting, it’s a shame the movie deviates at all from the more interesting timeline.

Adam Vaughn is a graduate of the Film & Moving Image program at Stevenson University, with a focus in Cinematography and Production. He also has a minor in Theater and Media Performance. Adam works as a freelance photographer and videographer, focusing his craft on creating compelling photographic and cinematic imagery. Adam is excited to join the Film Festival Today team and explore the world of cinema and visual arts.