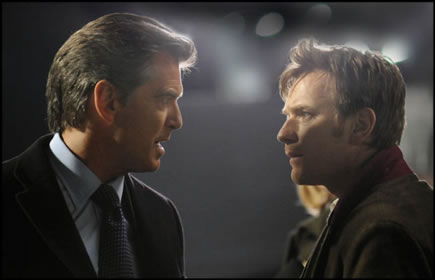 Director Roman Polanski’s latest endeavor is a meticulously crafted adaptation of a novel of the same title by Robert Harris, who co-wrote the screenplay.

The story revolves around Adam Lang, the former British Prime Minister, played pitch perfect by the accomplished Pierce Brosnan. Lang’s plight is that he acquiesced to the desires of an unnamed American President and is now being indicted by International Criminal Court for crimes of torture that were approved under his reign. To avoid arrest he must maintain residency in the United States which doesn’t adhere to the rulings of the ICC. The film begins with an unexplained body washing up in the surf at Martha’s Vineyard. The dead man turns out to be a writer who was helping the prime minister write his memoir for which the publisher had coughed up $10 million dollars. Hired quickly to replace him is a “ghost” (played beautifully by Ewan McGregor) offered a quarter-of-a-million dollars to re-write this dreadfully boring 600 page manuscript and turn it into readable prose in a month. But the writer soon finds out that there is more to this job than writing! After his initial meeting with the publisher he gets mugged by thieves who mistakenly think he is carrying the “actual” document. Soon all hell breaks loose as the pace picks up and turns the film into a rip-roaring political thriller with a cast of sexy(Kim Cattral) and suspicious characters and an ironic ending which will provide the viewer a climax and denouement all in one.