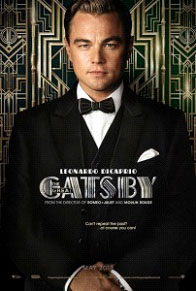 Maguire open-mouth stupefaction dominates, Mulligan is miscast, and DiCaprio does his best to save his dignity.

The Great Gatsby – written by F. Scott Fitzgerald in 1921 – is one of America’s great novels. Oh really?

First and foremost, the narrator, Nick Carraway (Tobey Maguire)*, dominates the film. As we will find out why later, Nick is currently in a sanitarium and telling a doctor what happened in the summer of 1922. Is he a patient because of some traumatic war injury, he was lost a sea for 79 days and forced to eat his companions, or he killed his parents in a fit of uncontrollable rage?

Oh no! It’s far worse than any of these scenarios. 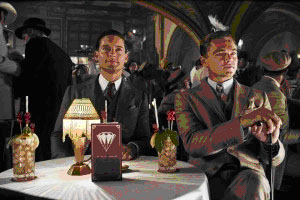 The film is all about Nick and his “Gee whiz” face of wonderment as he wanders like a starry-eyed child into the degenerate display of excess by the “mysterious” Jay Gatsby (Leonardo DiCaprio). We are in the world of the very wealthy living in mansions on Long Island. Directly across from Gatsby’s mansion happens to be the mansion of old money blue blood Tom Buchanan (Joel Edgerton) and his wife Daisy (Carey Mulligan).

Tom is a serial cheater. Daisy lounges around all day. Daisy is spoiled but hardly a devastating beauty. She has no sex appeal or charisma. Since Nick is Daisy’s cousin, how come he is in such awe of wealth? Daisy married well but she certainly did not help her family. Clearly, Nick was never invited to the Buchanan’s mansion.

Guess what? The Buchanan’s have no idea that Gatsby is the owner of the Versailles-like property. Gatsby has huge indulgent parties every weekend but Daisy has no clue her former boyfriend is the man who spies on them from across Long Island Sound.

Tom takes Nick to New York City and they indulge in some provocative horseplay with Tom’s mistress Myrtle (Isla Fisher) and her girlfriends. Like a wide-eyed schoolboy, Nick succumbs and gets blind drunk and dances with abandonment. Tom and Nick are now tight, but soon Nick is wondering about his reclusive neighbor, Jay Gatsby.

Finally, after watching awestruck Nick dominate the film for half an hour, Gatsby arrives! 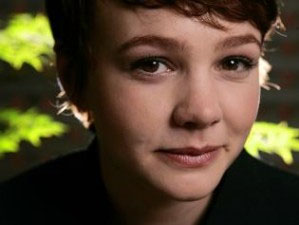 Not to be outdone by Tom’s entertainment expertise, Gatsby takes Nick to a speakeasy and introduces him to a friend, notorious gambler Meyer Wolfshiem (Amitabh Bachchan).

Gatsby befriends Nick – who has taken a small cottage next to his mansion – for one simple reason. He wants Nick to invite his cousin Daisy to the little cottage for tea.

Nick keeps looking adoringly at Gatsby and sitting way too close to him. They are always smiling at each other. They wait at the cottage for the arrival of Daisy. 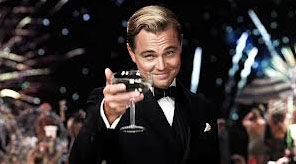 In a hilarious scene, Gatsby sweats, gasps and fumbles around in fear and trepidation. He is so nervous he flees into the pouring rain. Soaking wet, he returns to a waiting Daisy. He looks into the face of God and collapses. As he falls he takes an antique clock with him.

A man of such wealth – due to some unsavory business deals with Russians – he has acquired manners and style and created a mysterious aura around himself. But he’s a blithering mess around Daisy. 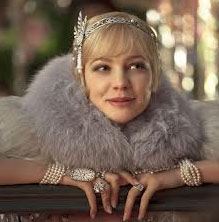 After Daisy dumped him, dirt-poor Gatsby went to war. Returning, he decided to become the man Daisy deserves. Daisy was Gatsby’s obsession. He cares for nothing he owns and can easily do without the 10 manservants he employs. He doesn’t even go to his vulgar, excessive parties. He just looks out his window at Daisy’s house. He built everything to entice her to divorce Tom and marry him.

It’s been five years since Gatsby saw Daisy. Up against the aggressively virile Tom, pink-suited Gatsby looks like a dandy. Every time he sees Daisy he cries. No wonder Daisy is torn between the two men. 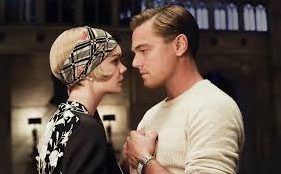 As we have learned, Tom is constantly cheating on Daisy. He’s no good. Gatsby might be extremely wealthy now, but if it’s due to something illegal, he could lose it all. And, he does not have the right social credentials or education. His grandparents and parents are nobodies. Daisy takes all this into account.

The tragic ending of Nick’s summer sends him straight to the mental hospital. His doctor’s advice is to write it all down. 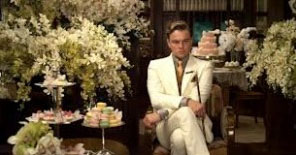 The director, Baz Luhrmann, does Mulligan no favors. Her lighting is awful. There is not one hint of why Gatsby is obsessed with her. We are given not one reason to accept her as the great Gatsby’s enthrallment. Mulligan is cute but she does not have the smoldering sexuality that is barely contained. 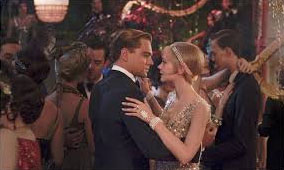 Luhrmann told The Hollywood Reporter, “Leonardo was at every audition. He worked with me – it was work. He is not an acting snob but I guess if he was a chef, he can really tell what is fine cuisine. So Carey came in. I’d swapped scenes (to read during the audition) and forgot and (the script said) she kisses him. (Mulligan) grabbed me… and she said, ‘Should I? Should I kiss him?’ I went, ‘Yeah, but don’t tell him!’”

“So she does the scene, absolutely fantastic, and grabs him and kisses him. She went out the door and I was just thinking, ‘My God, that is Daisy Buchanan.’”I would love to see the other auditions, wouldn’t you? Someone has them and needs to YouTube them.

As I have said, there is way too much Tobey Maguire. And Luhrmann keeps the camera on him even when he is at Gatsby’s rave surrounded by drinking, dancing, entertainers, and beautiful women. One grows tired of the innocent, naïve Nick fast. If Nick is supposed to represent us, we are far more sophisticated.

DiCaprio is a major star but why did he allow Gatsby to be portrayed in such a wimpy-ass way? If “THE GREAT GATSBY” is really about social elitism and class identity, why not highlight the differences and the old money folks looking down on Gatsby’s ill-bred display of wealth?

The sensational opulence on display, a Luhrmann trademark, looks rushed. When has a mob ever been sexy? Gatsby’s bacchanalia centered on drinking and wasn’t very decadent. Gatsby role was as director and bemused voyeur.

The 3D was nice but unnecessary. You hardly noticed it.

*What has Tobey Maguire been up to since leaving the Spider-Man franchise? From several sources, including digitalspy and radaronline, comes the following: “The Spider-Man actor was named in an illegal gambling suit in 2011 in which he was sued for taking part in the card game with jailed criminal Bradley Ruderman. Maguire is among more than a dozen high-profile Hollywood people being sued in connection with a mega-millions illegal gambling ring that ran high-stakes underground poker games, Star magazine is reporting exclusively.”

“Maguire, 35, won more than $300,000 from a Beverly Hills hedgefund manager who embezzled investor funds and orchestrated a Ponzi scheme in a desperate bid to pay off his monster debt to the star and others, it’s alleged. Tobey Maguire has insisted that he was unaware that he was breaking the law upon becoming involved in unlicensed poker games, which also involved Matt Damon, Leonardo DiCaprio and Ben Affleck. Maguire won as much as $1 million a month over a period of three years, one source told Star Magazine. “That means he could have made up to $30 to $40 million from these games,” the whistle-blowing card shark predicted to Star. In a world exclusive investigation, Star detailed how the A-list aces used secret passwords to play in the covert games that were so intense, the door was manned by armed guards in bulletproof vests. http://radaronline.com/exclusives/2011/06/tobey-maguire-sued-illegal-poker-game-leonardo-dicaprio-ben-affleck-matt-damon/

**Carey Mulligan’s New Look, September 13th, 2010. Carey Mulligan was Hollywood’s It Girl last year. Now, she’s looking more polished on the red carpet, dyed her hair blonde, and gotten some plastic surgery. She wants the big Hollywood career. Check out her nose, the bridge is slimmer and the tip of her nose is different. And, in the after photo, her eyes look wider and more open. That could only be from a brow lift. Don’t let the hair color change fool you. http://www.goodplasticsurgery.com/2010/09/13/carey-mulligans-new-look/