14 years ago, Korean director Park Chan-wook secured a huge legion of fans with his critically acclaimed thriller “Oldboy”, which later on was subjected to a lame American remake directed by Spike Lee.
During the following years, Chan-wook came up with some good ideas, most of them characterized by violence and general alienation. Titles like “Lady Vengeance”, “Thirst”, and “Stoker” belong to this roster.

This year, and for our surprise, he resolved to change direction, adapting Sarah Waters’s novel “Fingersmith” and switching its Victorian background for Korea under Japanese colonization. He counted on his regular collaborator Chung Seo-kyung to work on the script.

The voluptuous psychological thriller, “The Handmaiden”, stars Kim Min-hee and Kim Tae-ri as Lady Hideko and Sook-Hee, respectively. The former is a wealthy Japanese heiress who lives with her stern uncle, Kouzuki (Cho Jin-woong), while the latter is an experienced Korean con artist who is hired by a scheming man who, adopting a false identity, goes by the name of Count Fujiwara (Ha Jung-woo).
His plan consists in sending Sook-Hee, operating under the name of Tamako, to the opulent mansion of Hideko, an orphan haunted by nightmares, where she would work as her personal maid. This strategy envisions to facilitate his access and intentions of marrying Hideko to steal her inheritance. 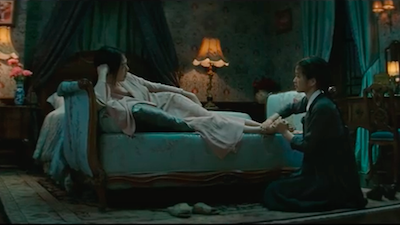 Everything was going as planned, but unforeseen difficulties arise when master and servant embark on a scalding lesbian romance that leaves Fujiwara aside, with no financial perspectives.
Along the way, we learn more details about the characters, especially Hideko who struggles with psychological problems related to a terrible childhood. She lives haunted by her aunt’s ghost and trembles with fear of her perverted uncle.
Sook-Hee, whose ambition is not as big as her passion for Hideko, manages to get rid of Fujiwara with a little help from the deranged Uncle Kouzuki.

Rich in dark humor, detail, and color, as well as marked by a strong narrative, “The Handmaiden”, eschews the bloodsheds that Chan-wook is so fond of.
Instead, it intertwines lustful carnal scenes and tense artful schemes.
The package comes full of fine ingredients, old and new, telling us that the filmmaker’s vision and aptitudes are wider that we’ve had imagined.

ABOUT FILIPE FREITAS
Filipe Freitas is a New York-based Portuguese film critic and jazz music writer.
He’s the founder and lead critic of Always Good Movies film website, launched in 2010, and co-founder of JazzTrail , site that explores the vibrant NY Jazz Scene. He has a background in electrical engineering, which he quit in 2012 to follow his dreams.