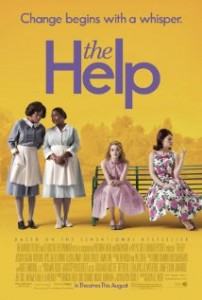 Actor and relatively unproven director Tate Taylor has done a remarkable job adopting the novel of his friend Kathryn Stockett for the big screen.  With poignancy, humor and pathos, the inextricably intertwined worlds of African-American maids and their white employers is rendered heartbreakingly true. The film brings to life the initial stirrings of the civil rights movement in Jackson, Mississippi in the early 1960s and captures the style and cadence of life in the Deep (Jim Crow) South.

The actors are pitch perfect!  Beginning with the emotion infused performance of Viola Davis (“Doubt”) who portrays the house keeper known as Aibileen Clark.  Aibileen is credited with raising 17 children from various white families while suffering the loss of her own child in an accidental death.  Her best friend is Minny Jackson (portrayed by the wonderful Octavia Spencer) who works for a tyrannical racist, Hilly Holbrook, given extra zest by Bryce Dallas Howard.  Minny is fired for defecating in a pie she served Holbrook which was lovingly labeled by the maids as the “Terrible Awful”.  Terminated and ostracized by the white upper crust, Minny must work for the inept and ditzy Celia Foote (Jessica Chastain) who brings the “Dumb Blond” jokes into this thoroughly entertaining tale with an unerring sense of humanity.

All of these episodes are brought together in a book called ‘The Help’ authored by a graduate of Ole Miss named Eugenia “Skeeter” Phelan played by the gifted Emma Stone.

Skeeter has first-hand knowledge of the milieu of the local maids because she was raised by her family’s humble servant Constantine Jefferson (Cicely Tyson).  The mysterious disappearance of Constantine from the Phelan household is one of the intimacies built into the script that grip the viewer. The one weakness that I must bring to bear is that a “white woman” is credited with exposing the problems of   these African-Americans.

Top notch production credits from Stephen Goldblatt’s camera which was in service to the story and an upbeat score from Thomas Newman make this film certain to receive attention at Oscar time. It brings to our attention, in an intimate way, a part of our history which today we may have overlooked. Where is Oprah when you really need her?