Director Kathryn Bigelow’s latest endeavor “The Hurt Locker” begins with a quote from New York Times correspondent Chris Hedges that sets the tone of this film “that war is a drug” and that for certain individuals, the adrenaline rush of working in a job where one miscalculation will end your life becomes an addiction. 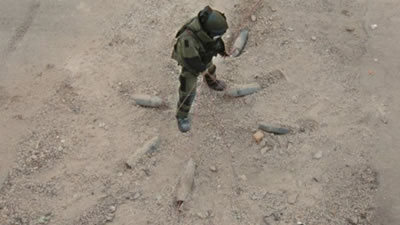 By now you’ve probably figured out that The Hurt Locker” presents daily life within a bomb disposal unit.  It shows how select soldiers with high I.Q.s  go out, day after day, identify improvised explosive devices and either deactivate them or blow them up within controlled areas. It shows the various roles that each member of the unit plays, the routine, the hierarchy and the enormous stress involved in knowing, as you wake up each morning, that this might be your last day on earth. The scriptwriter, Mark Boal, who was a journalist embedded in this bomb unit also authored the poignant, but financially unsuccessful, “In the Valley of Elah”.  “The Hurt Locker”, whose title is gleaned from the place you end up if you’re severely injured on one of these assignments,  concerns a three-man Explosive Ordinance Disposal (EOD) unit in the U.S. Army that’s led by a an arrogant young sergeant named William James (Jeremy Renner). James is new to the company but already a veteran of other Iraq operations, and he is willing to ignore many protocols and get down to the no bullshit- business of defusing these explosives.

What makes this film work so effectively is that Bigelow understands that personalizing her characters and using a peripatetic camera draws the viewer into this hell hole emotionally. Up to now, Iraqi war movies, no matter how well made, have failed at the box office.   “Hurt Locker” should put an end to that losing streak. It  takes an apolitical stance and is a tense, taut and masterful thriller that is an action drama that will suck you in and keep you on the edge of your seat to the final frames.  It inspires those that make “indie” movies that they can make emotionally gripping cinema where explosions actually mean something to an audience.