Director Lisa Cholodenko borrows the title for her latest film from a classic song by The Who and makes a strong statement about love and life in the 21st Century. The story revolves around a lesbian couple named Nic and Jules(Annette Bening & Julianne Moore) and their teenage children Joni and Laser(Mia Wasikowska & Josh Hutcherson)seeking out their biological father-Paul, played pitch perfect by Mark Ruffalo. 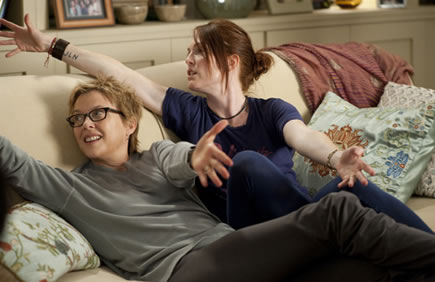 This third feature from Cholodenko displays in abundance her honesty and ability to obtain truthful performances from her actors. By far the least likable character, uptight doctor Nic (Bening) appears engagingly stern from the point when she learns that 18-year-old Joni (Mia Wasikowska) and 15-year-old Laser (Josh Hutcherson) have secretly sought out and met their biological father, Paul (Ruffalo). Moore’s fully realized Jules is at once sharp and flaky, an underachiever whose landscaping biz is floundering until Paul, an organic crop farmer and restaurateur who starts coming to family dinners, offers her work on his unkempt backyard. Nic’s eventual realization that Jules and Paul have been tending more than his bushes is indelibly captured in an emotional catharsis that is indelibly etched into our minds.

The soundtrack is replete with some excellent pop selections and the technical credits from cinematography to production design are first-rate.

It’s early in the game to say for sure, but this Sundance premiere has Oscar contender written all over it.