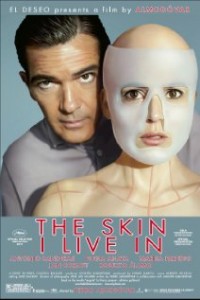 The Spanish auteur, Pedro Almodovar’s latest contribution is a meticulously crafted motion picture which lacks the humor and pathos usually found in his very best works.   This latest offering has flourishes of David Cronenberg’s clinical horror married to a   Dr. Frankenstein-like tale of obsession and sexual intrigue. It is essentially a “B” movie that exceeds that boundary because of its high production values and outstanding performances. The script was adapted by Almodovar and his brother Augustin from a novel entitled “Tarantula” by Thierrey Jonquet.

The quixotic opening images of an elegant and stunningly beautiful woman named Vera (Elena Anaya) stretching yoga-like in a beige body suit sets the stage for this unorthodox tale.  The woman is kept like a prize locked up in a pale grey room atop a mansion /clinic known as El Cigarral.  Her food delivered by a dumbwaiter, serviced by the elderly upscale house keeper named Marilla (Marissa Paredes), even contains reading matter. The owner and chief medical practitioner of this immaculately kept space is a high-end plastic surgeon named Dr. Robert Ledgard (Antonio Banderas), who wears hand tailored suits and is meticulously groomed in the style of Hollywood’s Golden era.  Ledgard is depicted as a serious scientific explorer developing an epidermis which has fire resistance, in homage to his dearly beloved wife, who got mixed up with a low-life, and, burned to death when the car she was riding in crashed. The narrative is fractured into time periods that are somewhat confusing and rapidly changes gears when Zeca (Roberto Alamo), the son of Marilla, dressed in a tiger costume perpetrates an attack on Vera with consequences I can not reveal least I spoil all the fun!

“The Skin I Live In” is worth you’re time and money even if it has its flaws.  It entertains and leaves you with a shocking revelation.  It’s just that my expectations for this director are so high that it leaves one mildly disappointed.