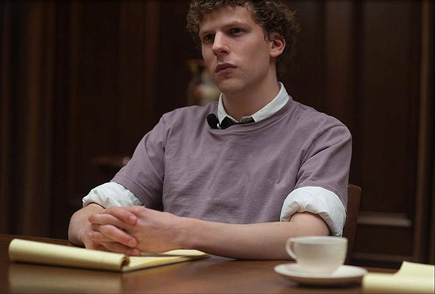 The movie which starts us way back in 2003, begins with one young lady calling Mark (Eisenberg) an “asshole” and as difficult to date as a “Stairmaster”. She is Erica, and is played by Rooney Mara, soon to be seen in the title role of Fincher’s remake of “The Girl With The Dragon Tattoo”. This incident with Erica is the catalyst that sends Mark back to his dorm room which he shares with Dustin Markovitz(Joseph Mazello)and Chris Hughes(Patrick Mapel). He is fueled by his anger and frustration with dating and his superior intellect (a perfect 1600 on the SAT) tackles the problem by creating a social network called Facemash that ranks Harvard undergrads on a hotness scale. Zuckerberg’s concept gets refined and reworked and taps into the need for human friendship as our digital world generates isolation and celebrity worship. But the film’s core is a convoluted tale of unbridled ambition, spectacular betrayals and contains copious doses of sex, drugs, and lawsuits that never seem to end. The electronic score by superstar rock musician Trent Reznor(Nine Inch Nails) creates the proper mood to reinforce the precise camera of Jeff Cronenweth(whose father, Jordan, shot “Blade Runner”) This is a movie for our times and is one of the best of 2010.