From director Matt Tyrnauer – who last gave us Scotty and the Secret History of Hollywood, profiling the erotic lifestyles of Hollywood’s heyday – comes another lurid tale, this one of sex, drugs and rock ‘n roll (make that disco) in New York City’s seedy late-’70s nightclub scene. As the title accurately indicates, this new documentary explores the rise and fall of the eponymous dance lounge, which burst into existence on April 26, 1977, shone brightly for 33 months, and then was shut down for financial (and other) improprieties on the part of its owners. In just over 90 minutes, Tyrnauer walks us through the highs and lows of the club’s history, showcasing its iconic status in the culture of its time, and how it came to an ignominious end.

Ian Schrager and Steve Rubell met in college and became fast friends, despite their differences: Schrager was introverted, serious and straight; Rubell … extroverted, fun-loving and gay. Schrager became a lawyer, while Rubell started off in the hospitality industry. Coming of age as they did in the Big Apple of the 1970s, they found themselves drawn to the city’s changing nightlife and the way that gay culture and disco were fusing into something wild and flamboyant, and after looking around for a spot of their own, found an old CBS studio where the 1960s game show “What’s My Line?” had once been filmed, converting it from production facility to nightclub in just 6 weeks. Thanks to a blitz of publicity and the New York glitterati’s hunger for the latest and hippest, Studio 54’s opening night was a mob scene, leading to instant success. 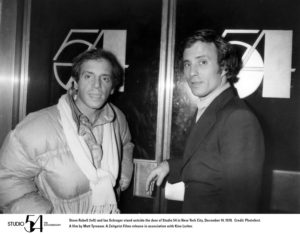 Soon, all sorts of celebrities were stopping by on a regular basis, from Truman Capote to Cher to Mick Jagger to Grace Jones to Calvin Klein to Liza Minnelli to Elizabeth Taylor to Andy Warhol; even young Michael Jackson stopped by. Rubell was the face of the operation, while Schrager remained in the background; silent partner Jack Dushey was even more secretive. And though the place was a haven for drug use and sexual activity (especially up in the balcony that overlooked the dance floor), it was also a safe space for people from all backgrounds and of all orientations to let loose without fear of judgment. Eventually, however, Rubell’s tendency to brag about his triumphs, coupled with the club’s reputation for exclusivity and the perennial long lines on the other side of the velvet rope, led to complaints about how the partners ran the establishment, and the IRS moved in. What the Feds found led to criminal prosecution, and Rubell and Schrager ended up in jail. Now that’s quite a hangover. 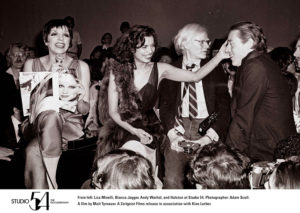 Tyrnauer is a consummate storyteller, and we get a meticulous account of both the macro and micro view of what happened. Though Rubell is no longer alive, Schrager still remains to tell his side of the story, as are many of the other principals. Since I just recently attended a Broadway show in the current setup at that same location – still called Studio 54 – it was fun to see what the venue once looked like at the height of its fame. Thanks to this fascinating film, my wonder was tinged with slight revulsion, since I had sat in the balcony. Here’s hoping the residue on my armrest was benign! Most likely all that remains are memories, however, and luckily for viewers, they’re all preserved here. Boogie on!