It’s a remake disguised as a prequel. A very good remake. 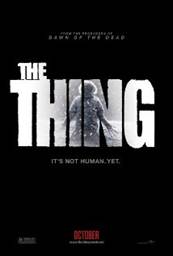 THE THING is a prelude to John Carpenter’s classic 1982 film. After the screening I watched the Carpenter version starring Kurt Russell.

It is a perfect match up.

Why not do another ALIEN movie this way? What happened to the colonists on LV-426 before Ripley and the crew of Sulaco landed? Sure, we know that except for Newt, everyone else perished, but who were they and what did they do to fight the aliens?

It is winter, 1982. A Norwegian expedition has found a huge extraterrestrial ship buried in the ice and Dr. Sander Halvorson (Ulrich Thomsen) has assembled a crew to go to Antarctica and investigate. He asks palaeontologist Kate Lloyd (Mary Elizabeth Winstead) to join the expedition. Not bothering with questions such as, “How long will I be away?”, “What is the pay?” or even, “I have to buy a warm coat”, she immediately hops on a cargo plane for the barren, frozen installation.

The crew’s pilot, Braxton Carter (Joel Edgerton) doesn’t do much. He’s along for the paycheck. 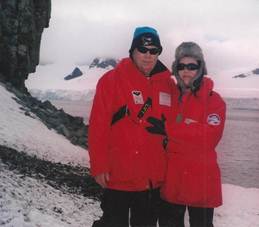 I’ve been to Antarctica. It is awesome. It changes one’s perception of Earth. Mankind is an anthill. (Photo: We boarded Zodiac dinghies and made several iceberg landings. Here we are on Half Moon Island, home to chinstrap penguins, nesting Antarctic terns and kelp gulls. There is a strict limit to the number of people who can go onshore each day and attendants – the ratio looked to be one attendant for every 10 penguins – watch you very carefully. The penguins have the right-of-way. There is lots of poop. This is no MARCH OF THE PENGUINS with pristine snow.)

Apparently when the alien ship crash landed, a crew creature/member escaped and froze in the snow. The crew discovers the frozen specimen, take it back to the installation, and drill a hole through the ice to get a tissue sample. As the team parties, celebrating the retrieval of the ice coffin, the melting ice awakens the creature. 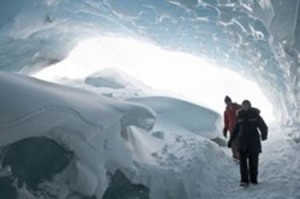 The ThingBursting free and causing much havoc, the camp’s resident dog is the first to go rogue.

Through molecular mumbo-jumbo, Kate explains that the alien’s DNA is absorbing human DNA and mimicking it.

Once the crew figures out that one or more of them is now incubating a monster, paranoia and chaos sets in. 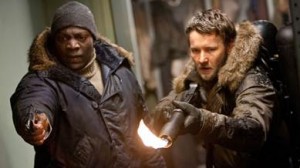 Apparently there is no telling when the alien creature being incubated will emerge. And when it appears, the thing has taken the human in its stomach and feeds on it. The special effects are impressive. We have to go on assumptions, since there is no way of knowing what the alien wants and what will it do when it kills off all its food supply. Geographically speaking, it’s at a dead end. How will it get to China?

As the alien starts devouring the crew in a rather horrible fashion, it falls to Kate to take charge. Why is that? Kate is the least knowledgeable and ill-prepared to handle logistics and weapons. 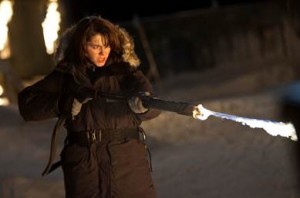 Sorry, Kate does not have the fortitude and steely intelligence of Ripley. Kate’s too young, small, and should not be able to command respect from the seasoned crew members. Someone should tell Kate to go to her room.

Know what I hate about horror movies? The group that is under attack lethargically waits for instructions from the star (shepherd to the flock of sheep). Whatever happened to “Every man for himself?” Come on, the first thing that happens in a catastrophe is looting. Then mass hysteria.

What would I do? Take all the food and weapons I can get my hands on and take to the high ground. Wait it out.

Instead, the crew assembles in the rec room and throws accusations at each other. One or more always go wandering off. Everyone steps in the oozing alien blood. Suspicion mounts and hysteria ensues.

Kate finds a way to discover who is harboring the alien thing. Kate is in charge.

I would have thrown in with Jameson (Adewale Akinnuoye-Agbaje).

While the 2011 version takes advantage of advanced special effects, the 1982 version has Kurt Russell in charge and it looks like they were really in sub-zero weather. Kate goes outside without a hat!