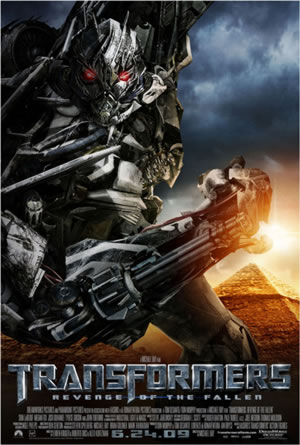 Picking up where the original ended, for nearly two and a half hours (149 minutes to be precise) you will see more explosions than Baghdad during the shock and awe campaign. With awesome live action, amazing CG  and a good dose of humor the latest “Transformers” delivers plenty of bangs for your bucks.  As in the first part of what will eventually be a trilogy, Sam Witwicky (portrayed brilliantly by Shia LaBeouf ) possesses the Decepticons’ ticket to world domination.  Leaving his wacky parents and his gorgeous mechanic girlfriend behind (Megan Fox) he attends a college that has all the trappings of Princeton, but is populated by students that all look like Hollywood starlets. Within moments the Decepticons have sent one of their own to treat Sam to a lap dance in hopes of extracting shards of the powerful cube known as “The Spark”. Other humorous scenes include Sam (La Beouf)  entertaining a new girl in his Autobot car. When his car thinks he’s cheating on the Megan Fox character it starts to make life miserable for the girl sitting in the passenger seat including finally throwing up on her. It’s one of many  hysterical scenes. But, the true stars of this louder, longer and visually overwhelming sequel are the Transformers themselves as the Autobots and Decepticons battle over the Pyramids of Egypt.  It’s all nonsense and at times incoherent, of course, but for Paramount (who did this one with Dreamworks) its another home-run to follow-up J.J.’s “Star Trek” .

Overall, this Transformers has it all and will be a billion dollar baby in the worldwide B.O.