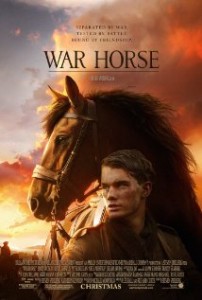 The auteur and Oscar-winning director Stephen Spielberg has crafted a fascinating and impressive motion picture in the style of a heart-warming epic from Hollywood’s Golden Era. Deriving its story from Michael Morporgo’s 1982 children’s novel, the screenplay was adapted by veteran scribes Lee Hall and Richard Curtis. It differs dramatically from the highly applauded 2007 London theatrical production, now on stage in NYC, as it dispenses with equine puppetry and makes the horse named Joey the real deal. (actually it took eight different horses to portray all the scenes in the film)

The story has a similarity to the classic French film about a mistreated donkey entitled “Au hasard Balthazar” from the dark catholic Robert Bresson. It   literalizes the fantasy tale that depended so much on the audience’s imagination.    What the film brings to the table is the majestic and sweeping mise en scene of Academy-award winning DP Janusz Kaminski and his wondrous visualization which helps minimize the occasional over-reliance on cloying sentimentality.

The production design is impeccable and the story first establishes life on a British farm where teenage Albert (a promising debut from Jeremy Irvine) bonds with a gallant horse named Joey purchased foolishly by his drunken father (Peter Mullan) for more money than his budget would allow and causing the horse to be eventually sold to the cavalry and conscripted into battle. .

The loss of Joey to the war causes young Albert to enlist in hopes of reuniting with the noble beast.  We follow the plight of Joey as he takes on a perilous journey through the front lines of WWI. .  There is a breath- taking battle scene where there is a British attack upon German lines across a sort of No Man’s Land — very similar to Kubrick’s classic tracking shot of French troops attacking the Krauts in Paths of Glory.  In homage to Renoir’s “Grand Illusion” soldiers from opposing forces have a polite and civil conversation when it comes to determining Joey’s fate as the poor animal gets itself caught up in barbed wire.

The cast is strong and includes Emily Watson, Benedict Cumberbatch, Neils Arestrup and Tom Hiddleston.  The score from John Williams is emotionally poignant and in keeping with the Spielbergian tradition of reinforcing the theme of this historical epic. “War Horse” is an accomplished piece of cinema which falls short in narrative involvement and at 146 minutes could have been tighter.  Nevertheless, it will emotionally move audiences and should hold its own all over the world giving DreamWorks something to celebrate in 2012.