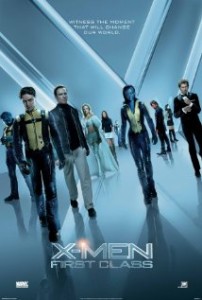 Director Matthew Vaughn ( “Kick-Ass”) working from a story by Bryan Singer and Sheldon Turner and a  screenplay by Ashley Edward Miller, Zack Stentz and Jane Goldman, kicks- off this exhilarating prequel with a preface that takes place in a World War II concentration camp. There, a fiendish Nazi doctor taunts a Jewish boy with extraordinary powers… The boy’s name is Erik Lensherr, and he grows up to become the malevolent, metal-bending Magneto.  In a stroke of brilliant casting Michael Fassbender assumes this role as an adult.

This prequel draws its strength by setting the beginnings of the X-Men saga in the early 1960s.  This makes possible a reshaping of the Cold War by the mindbenders and force fielders along with the tutelage of Professor Charles Xavier and the stylistic designs of James Bond.

The intriguing thing about prequels,—getting to see how everyone was before their powers were defined. The most interesting reveals  include James McAvoy as the telepathic Charles, touching his forefinger to his forehead and being able to read someone else’s thoughts; and Jennifer Lawrence as the blue-skinned Raven, a young adult dealing with issues. .Kevin Bacon makes a powerful and reprehensible villain with Sebastian Shaw;   Rose Byrne’s CIA agent, Dr. Moira MacTaggert, and January Jones’s Emma Frost, interject their selves into the proceedings with Ms. Byrne’s gorgeousness and Emma’s diamond-faceted skin

Vaughn keeps things moving by focusing on different characters and settings. The training sequences are fun to watch as the mutants learn hand-to-hand combat with bayonets or how to focus their flames and beams on various targets.

The most poignant thing about this film is that it revives this comic book franchise. These young prodigies must test their powers before they use them. Then, as the movie tells us, they’ve got to grow up and save their country.  It’s all in a day’s work for this emerging crop of super-heroes. Well done and ready for another iteration, “X Men: First Class” is worthy of your time and dollars.