Clever and packed with smart characters.

Indie horror films, without the big financial backing of a studio or the interference from producers, agents and star actors with script notes, have one thing in their favor. They must be clever and imaginative. A credit card budget forces ingenuity. And, it makes for an excellent audition reel – unless you go the Chelsea Handler route.*

After THE BLAIR WITCH PROJECT (1999), which, according to IMDb, was reportedly made for $60,000 and had a worldwide gross was $248,639,099, the scenario of a team going into the woods exploring a mystery is standard indie ground.

Of course, there is the other indie staple – the zombie scenario. 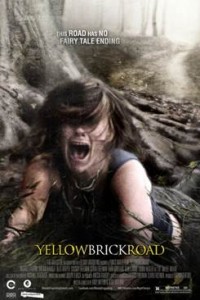 Back in 1940, the entire population of Friar, New Hampshire gathered in their Sunday best for a processional walk into the woods. They never came back. They left behind all their stuff.  Later, the U.S. army found the remains of over 300 people, but the rest of the town’s people were never found.

With release of all the documentation, interview with the sole survivor, and a few lousy recordings, Teddy Barnes (Michael Laurino) and his wife Melissa (Anessa Ramsey) put together a sophisticated group to re-trace the trail, called Yellow Brick Road, the people took. They are planning to write a book about the mystery.

None of the current townspeople will talk to them. Finally, one young woman agrees to show them the way, but only if they take her along. 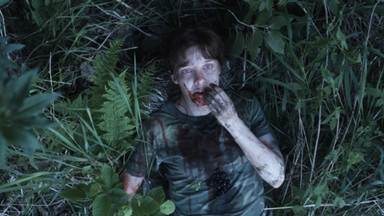 Unlike other movies where the stranded characters go into the woods only wearing cut-off jeans and tank tops, this research group comes totally equipped. In fact, it’s so professional Barnes has included a psychiatrist who keeps interviewing the members about their mental well-being! Two professional cartographers are along to read the coordinates and map their route. They have everything they need and an all-terrain vehicle. What can possibly go wrong?

On the trail, the group finds an antique hat that has a delirious effect on wearers. That’s when the crazy loud music begins. Who or what is behind the deafening torture music?

Slowly, the members of the group start behaving erratically. And once the gruesome killing starts and their equipment fails, how do they find their way out of the woods?

The resolution may seem inadequate but not me to. Since I just returned from the Brazilian rainforest and a very spirit-intensive ritual involving spirits of the forest, I can affirm that communication between humans and non-human living beings defies a pat explanation or a standard cinematic wrap-up.

The spirits of the forest do not speak English. They communicate in symbols. We cannot fathom their agenda.

YELLOWBRICKROAD is the feature film debut from co-writers/directors Jesse Holland and Andy Mitton. Holland and Mitton build tension as the horror factor mounts. A skilled first debut, let’s hope this duo continues to explore the horror genre. By the way, whatever happened to THE BLAIR WITCH PROJECT’s Daniel Myrick and Eduardo Sanchez?

*Last year, a sex tape of ‘Chelsea Lately’ host Chelsea Handler surfaced. Despite what seems to be a very X-rated video, Handler claimed it was nothing more than a “joke” that she used to submit to comedy clubs as an audition tape. The video begins with Handler’s stand-up routine, but cuts to a more intimate setting (and graphic act) between her and a British man. After a sex scene, the video then cuts back to Chelsea’s joke-telling. But a rep for the comedienne says it was all a stunt to get her noticed.