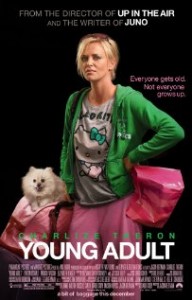 Oscar-winning screenwriter Diablo Cody (“Juno”) re-teams with director Jason Reitman, for this latest  transgressive dramedy about an obsessed thirty-something writer of young adult fiction.  Playing the lead character named Mavis Gary is Oscar winning actress Charlize Theron and she is a pitch-perfect condescending bitch in the tradition of Becky Sharp. Mavis was once the prom queen of a small Minnesota high school but suffering from a nasty divorce she decides to leave the big city and return to her glory days in the bumfuck town she grew up in and seduce Buddy Slade (Patrick Wilson) her high school sweetheart who now is married with a new baby.

As Mavis drives, she listens to 80s technology cassette tapes showing us how anachronistic her thinking pattern must be. She is addicted to Diet Coke, The Kardashians and chicken and rib type sports bars which she frequents with her laptop.  She is still emotionally immature and child-like, with adolescent priorities, prejudices and fantasies.  While drinking one evening she encounters an old classmate named Matt Freehauf, played with rueful indignation by Patton Oswalt.  He tells her how he was bullied and severely mugged at high school by a bunch of rednecks because they thought he was a fag. Now partially crippled he is the antithesis of Mavis, but both are carrying self inflicted baggage from their high school years. Matt provides a reality check on Mavis with his honesty and the two become a vital semi-comic duo together. But the film also has many fine supporting performances including Elizabeth Resser as Buddy’s wife, Beth; Colette Wolfe as Matt’s wife, Sandra; Louisa Krause as a simple-minded motel desk clerk.

But this movie is a tour de force for Ms. Theron and one of her finest performances to date.  This is partially due to the wonderful script that Ms. Cody has crafted and the look created by DP Eric Steelberg’s well thought out mise en scene.  It is a story that may be narrow in it scope but it is poignant in its emotional resonance. Its surprising ending will leave you feeling you were there.