Director Miguel Arteta is known for making dark comedies. His Sundance breakthrough was the excellent “Chuck & Buck” and he followed that with the solid “The Good Girl” which starred Jennifer Aniston. His latest romp is a coming of age comedy with inventive twists that make it both funny and engaging. 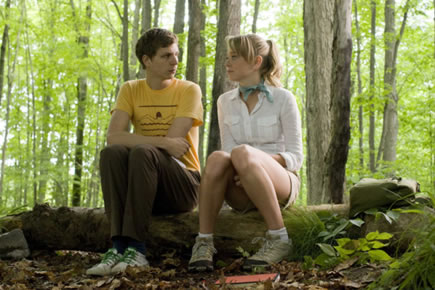 Michael Cera, while still playing the character we experienced in “Superbad” and “Juno”, plays himself as Nick Twisp and Francois, a sort of Jean-Paul Belmondo type that has the “balls” that the Nick character lacks. The story about a geeky high schooler aspiring to get laid has been told many times, but never like this. The story includes some really cool animation and some great cameo type performances from Steve Buscemi as Nick’s trailer trash father and Zach (“The Hangover”) Galifinakis as his mom’s screw-up, truck driver boyfriend. Also adding to the fun and mayhem are the zany Fred Willard, as his establishment hating neighbor, Ray Liotta as a duplicitous cop and a great performance from newcomer Portis Doubleday as Sheeni Saunders, the girl of Nick’s dreams.

To get the New Year off to great start, “Youth in Revolt” should fit the bill.