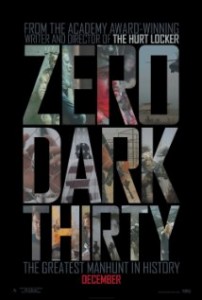 Oscar- winning director Kathyrn Bigelow’s fictional recreation of the hunt and execution of Osama bin Laden is a triumph from start to finish. The film’s title in military parlance refers to 12:30 am when the Navy SEALS began their mission in the fortress-like compound in Abbottabad, Pakistan.  The raid culminates in the climax of the drama that begins back in the twin towers World Trade Center with frantic calls for help from doomed occupants. The film is meticulously constructed from a screenplay by Mark Boals (“The Hurt Locker”) based on “first hand accounts of actual events”.

Early on, we experience a torture sequence with a Saudi Arabian terror suspect that ends in water boarding. We learn that even though these tactics are immoral they are highly effective.  As Dan (Jason Clarke), the CIA operative proclaims “when you lie to me, I hurt you”.

The manhunt’s driving force is a young CIA agent, of an elite team, who goes by the name of Maya (Jessica Chastain).  Maya decides that a strategy of focusing in on couriers will eventually lead to the location of the ‘safe house”. Chastain plays Maya with the zealous ferocity of a woman scorned as she roots out bin Laden while beating down her anachronistic boss (Kyle Chandler) who wishes to rely on Cold War tactics. In reality, we are told, that the Maya character is a composite figure inspired by a real person. (Chastain will no doubt be nominated for an Oscar for her work in this film).

Bigelow stages the raid by the Navy SEALS with a degree of realism rarely seen in a movie.  The SEALS blow open the doors, and inch by inch, annihilate those in their pathway as they reach their final prize in bin Laden himself. You must see this movie to see what the killing looks like.

Though seemingly a Hollywood production this film was wholly financed by Megan Ellison, the daughter of Oracle corporation mogul Larry Ellison. It is being distributed by Sony’s Columbia label. Unlike “The Hurt Locker” which grossed only $17 million, “Zero Dark Thirty” is expected to gross $100 million as it becomes essential viewing as part of the national debate on terrorism.