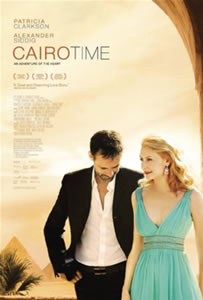 What do women want? It is a question for the ages….and one usually, asked and even answered by men. However, a rare feminine point of view of this ageless subject is on display in the new feature film CAIRO TIME, written and directed by Ruba Nadda and starring the gloriously talented Patricia Clarkson. The film is currently in theatrical release in North America via specialty distributor IFC Films. To view the trailer, log on to: http://pro.imdb.com/video/screenplay/vi4120643097/

Both Nadda and Clarkson were present for a post-screening discussion of the film last weekend at the Jacob Burns Film Center, the treasured arthouse complex in Westchester County north of New York City that continues to be a beacon of cinema civility in a theatrical environment dominated by cheerless multiplexes.

Back first back to CAIRO TIME…..the film won the Best Canadian Feature Film honors at last year’s Toronto Film Festival, already bringing it a distinction worthy of attention by cinemagoers of all stripes. The film’s theme, set in the sprawling and noisy metropolis of Cairo, is a tale dislocated souls who find solace in one another in a foreign land. Clarkson plays a magazine editor who has come to Cairo to be reunited with her husband, a United Nations official busy mending fences in the Gaza Strip. Since he is indefinitely delayed, he calls upon his former colleague, played with lanky, gentle charm by Alexander Siddig, to pick up his wife at the airport and occupy her time.

As the two patiently and cautiously circle one another, a definite attraction and recognition of kinship develops that neither can deny. However, this being a mature romance (as opposed to a Jennifer Aniston childish one), the two show remarkable restraint and never have the romp-in-the-hay romantic clinching that lesser directors would have been tempted to show us for pure titillation’s sake. In the end, Clarkson returns to her husband and Siddig returns to manage his souk café, but each has been moved by the experience and have been transformed in their own subtle ways.

Aside from the delicate acting by the leads, director Ruba Nadda uses the city of Cairo itself as a palpable “third character”. The smells, the sounds, the barely controlled chaos and the exotic beauty of the place clearly emanate from the screen. Audience members could be seen wiping their brow from the sweat of the city’s heat (not to mention the romantic set pieces and hunger between the two leads). A scene where the two spend time together at the Pyramids is especially haunting and moving (especially since Clarkson has promised to wait to see the landmark with her husband, but allows herself to go with Siddig, in a veiled sense of rebellion and carnal craving).

“Shooting in Cairo was difficult and stressful”, director Nadda told the capacity crowd at the Burns Film Center. “It helped that I speak fluent Arabic and was able to get the necessary shooting permits, ironically because I was Canadian.” The 25-day shoot “was barely controlled chaos at times”, Nadda added. “I wanted to shoot in some of Cairo’s best known and most crowded locations, and you just could not completely control the atmosphere of on site locations.”

For Clarkson, the shoot was also very demanding, since she is in almost every frame of the film. “This was my first time visiting the Middle East”, Clarkson offered. “I just never got adjusted to the time difference, the jet lag and the heat…..that contributed to my feelings of being dislocated and feeling like a stranger in a strange land.” Both expressed that they were engaged with the rhythms of the city and the exoticism of a country caught between ancient tradition and modernity.

As impressive as the film’s location is the gentle, observant pace of the direction, which uses to maximum benefit Clarkson’s innate beauty and ability to project depth and thoughtfulness through silence and subtle glances. In ways that are astonishingly vivid, Clarkson brings an entire history to this character with another in a string of exemplary performances for this unique actress. Compare this to another “chick flick” of the moment, the thin-as-paper EAT PRAY LOVE, wherein Julia Roberts cannot find the inner anguish and depletion of her character to justify her emotional outbursts and wanderlust to find life’s answers.

The director, of mixed Canadian, Syrian and Palestinian origins, brings a truly realized multi-cultural essence to the proceedings…..careful not to over-romanticize the characters and to indulge the audience in cheap, sentimental trickery. She provides viewers with a rare, almost uncomfortably intimate story set in the chaos of the modern Arab world and tells a tale of the triumph and rewards of emotional restraint.