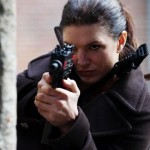 When it comes to female action-killers, male fantasies abound. We are narcotized into believing that 5’4”, 99lb. women can take on and fight in hand-to-hand combat with men and not get a scratch on them. We have Kate Beckinsale (UNDERWORLD: AWAKENING franchise), Milla Jovovich (returning this year again as Alice in RESDIENT EVIL: RETRIBUTION), kitten-like Zoe Saldana (LOSERS), and tiny, anorexic Rooney Mara (THE GIRL WITH THE DRAGON TATTOO) among others, not only swinging heavy weapons but doing it wearing S&M skin-tight outfits.

Just try leaping off buildings in a pair of 6” heels. 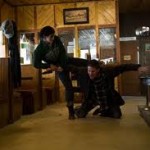 Fact: None of Ted Bundy’s victims were able to fight him off. The true number of Bundy’s victims is still unclear. The number could be well over 100. A total tally of 36 was once made to Bundy by the FBI during an attempt to make him confess. To this, Bundy responded with, “Add one digit to that, and you’ll have it”.

Could any woman get up from a punch by husky 6’3” Joran van der Sloot?*

Recognizing the absurdity of Hollywood’s female warriors, director Steven Soderbergh chose women’s mixed martial arts cage fighter Gina Carano to star in his film. You can see that Carano did her own stunts in this highly entertaining, fast-paced thriller.

You actually believe this woman can fight a man and win. In fact, Carano is fantastic (even with her voice lowered in post-production as Entertainment Weekly reported). While Soderbergh is supposedly retiring from filmmaking (years from now) and is not planning a HAYWIRE sequel, I want to see more of Mallory Kane. 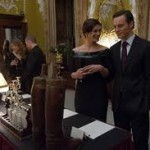 Mallory Kane is an original.

There is no need for a backstory. Mallory Kane (Carano) is in a diner when Henry Aaron (Channing Tatum – who has been turning up in every movie I see. I spotted him in the crowd in MAN ON A LEDGE yelling “jump”.) After referencing “Barcelona”, Aaron punches Mallory in the face in front of the shocked, but non-pulsed, diners.  In the confines of a small diner, a roaring fight ensues. After Mallory’s vicious fight with Aaron ends with him badly beaten, she grabs a young guy, Scott (Michael Angarano), and takes off with him in his car. Realizing she is in danger, Mallory starts telling Scott her story that we see in flashbacks.

Mallory is a freelance black-ops killer employed by a private firm run by Kenneth Jay (Ewan McGregor) who is in cahoots with a US government agency headed by Oliver Coblenz (Michael Douglas). Something bad happened in Barcelona, but regardless, Kenneth has a 2-day snatch job for Mallory. Mallory is teamed up with British agent Paul (Michael Fassbender) to rescue a Chinese dissident, Jiang (Anthony Brandon Wong), being held in Dublin. They are supposed to be husband and wife.

Mallory is suspicious of Paul and after an evening at a gala event, she finds Jiang shot in the head. Returning to their hotel room, Paul viciously attacks Mallory. They engage in a horrific fight. Paul shows her no mercy and the violence is stunningly filmed. Let’s just say, Mallory can take a punch. Carano is electrifying. We do not expect killers to be chatty conversationalists or philosophically introspective. They have an efficient way to end conflicts.

As Mallory, Carano easily holds her own with veteran actors Michael Douglas (Soderbergh’s TRAFFIC), Antonio Banderas, Bill Paxton (as her Mallory’s father), and Ewan McGregor. It is Fassbender who gives Carano sex appeal. It is now standard operating procedure for stars in action-adventure films to run. Remember Daniel 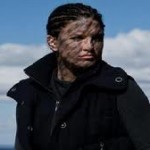 Soderbergh gives Carano a running scene, but I especially like the rooftop run. Finally, someone running away who does not know where to go and has to turn back and find another way. Another shock is that Mallory actually gets hurt jumping off a roof! And the ending? It’s perfect.

*One of my favorite comedians is Jennifer Kober, an obese woman who says she does not like the word “fat”. Instead, she prefers “Hard to Kidnap”. You have to admit, Kober has a point. http://www.youtube.com/watch?v=CQmD0mKQhgM.