INTERVIEW | Todd Haynes on “Mildred Pierce”: Too racy for indies, but perfect for TV 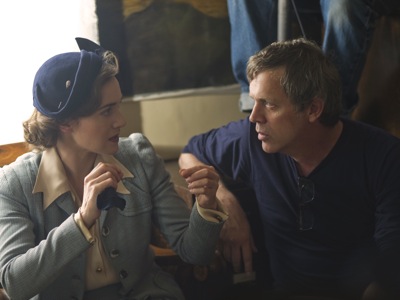 Kate Winslet and Todd Haynes on the set of “Mildred Pierce.” Image courtesy of HBO.

Todd Haynes began his career as a daring provocateur with his feature, “Poison,” twenty years ago. While he has continued to work against the grain in a handful of unconventional follow-ups, from “Safe” to “I’m Not There,” as Haynes’s profile has grown, so have the visibility of his projects. There is no greater example than his latest effort, a sprawling five-part adaptation of James M. Cain’s 1941 novel, “Mildred Pierce.” With Kate Winslet in the role that won an Oscar for Joan Crawford in 1945, the series has garnered some of the best notices—and cross-over potential—of Haynes’s career. The epic melodrama follows Winslet’s character, a single mother, through the harshest years of the Great Depression.

Although “Mildred Pierce” involves none of cinematic trickery associated with the majority of Haynes’s career, it still deals with the unnaturally dark, alluring themes of repression and desire found throughout the filmmaker’s oeuvre. In the first installment of indieWIRE’s two-part interview with Haynes, he discusses the warm reception for the series, his initial interest in the material and why he felt comfortable working in a commercial environment. Stay tuned for the next installment, where Haynes looks back at “Poison” and considers its relevance in today’s climate.

Some people who never got into your style of filmmaking before have said that “Mildred Pierce” is the first Todd Haynes movie that really worked for them. When you took this on, were you thinking about how you might be addressing a larger audience?

For sure. It was definitely conscious on my part. This was a different mode of connecting to audiences—on television and, more specifically, in a long-form dramatic miniseries. That excited me. I liked that challenge. In a way, I felt like the narrative experiments that might characterize almost all of my feature filmmaking in one form or another were less germane for this. I wouldn’t probably have felt as committed to the material if I didn’t feel that the material itself and the feelings of class and domestic pathology weren’t really pretty radical, but also really truthful in their own terms. I felt like the themes were really interesting and also particularly relevant right now, but it didn’t need a challenging structure or style on top of it. This is coming into people’s living rooms, and I respect that. I’m a consumer of popular entertainment as well and I think it has tremendous powers. I was happy to explore it.

Also, I liked the technical challenge of creating suspense over time. This novel of James M. Cain’s is also a departure of his own from the kind of work he’s associated with—crime-based, first-person-narrator-based. It’s almost this dogged attempt to be classical in a way. What he attempted was a realistic portrait of a mother-daughter portrait. A woman who tries to get what she needs for herself and her daughter. And how doggedly he stays connected to Mildred as a character was something that John and I honored, so it’s intensely linear. Nothing occurs in it that isn’t witnessed by Mildred in this intense, forward momentum.

While the story has been around for decades, this is very much a television project of the moment. You couldn’t have made a miniseries in this fashion in the early ‘90s, when your career was just getting started.

That’s absolutely true. The logistical experience of working with HBO, where they are today, what that offers independent filmmakers is really rare. I really appreciated it. It was a real surprise to find such intelligence at the top of that studio. They were invested in the complexity of the material. There’s stuff in there that even at an independent studio, distributors would have been more skittish about.

What do you mean by that?

I assume I just meant—not that material in “Mildred” would be too racy or challenging for the indie film world, but just that it’s increasingly harder to find financing these days for serious dramas, domestic stories, female-driven narratives—everything we already know. The recent record profits of studio productions one would hope would have the effect of broadening, not narrowing, the possibilities—since they can afford it—but, unfortunately, it’s having the reverse effect, and that anxiety impacts independent financing as well.

What was your motivation for taking on a project like this right now?

Christine Vachon, my producer after all these years, had just been moving increasingly towards working in television. She had been realizing that the practical opportunities there for a lot of the projects she had been trying to get off the ground. She said I should really think about doing something for cable at some point. It would be a cool opportunity to do something for that format.

At the time I was going through stuff like “The Wire” and just being blown away. Of course, that’s a different thing; it took place over the course of several years. That, along with “The Sopranos,” is some of the best serial television ever produced, just so complex and so socially and politically engaging and intelligent. There’s a lot to respect and admire about what’s been possible on HBO and other channels. “Mad Men,” on AMC, was sort of a revelation. People sort of bring up that it’s very much within the spirit of what I was doing on “Far From Heaven.” I think there are similarities, but I also think they’re doing something different.

So it was also serendipity of reading “Mildred Pierce” just as the financial markets were starting to tumble and not having known the book before then—I knew the film version, of course—but not the intense differences between the film and book, and how much more about the financial plight of Mildred is played out over time in the novel. It felt really topical and exciting thing to do right now. I had been hearing so much about how we were repeating the Depression years. I was like, fuck, I want to get into the Depression myself and study and learn and immerse myself in all of the details of the era. And it was a very different kind of maternal drama where issues of work and labor are so much more a part of the story because Mildred is this industrious character and all the more interestingly, one motivated by all these sort of unhealthy and misplaced desires based around her daughter. How she transforms that stuff into productivity.

To a certain extent, the themes in the film mirror those of “Far From Heaven.” You’re dealing with an era of American society in which certain norms resulted in a lot of repressed desires. Also, in both cases, you’ve adapted to existing conventions of melodrama.

“Far From Heaven” was going back to what seemed to be the most apolitical climate of fantasy production—the melodramas of the ‘60s, a la Douglas Sirk—at the time, although people have been studying those movies and finding all kinds of latent radicality and embedded critical perspectives of modern life, like Fassbinder and others. It’s the least likely place to find social political critique, and I think that’s all the more reason it’s there in such interesting forms.

For “Mildred Pierce,” I looked at it as an opportunity to use a different reference point. There was a time of consciousness about using classical forms and genres and reconfiguring them for a modern audience, and that was the ‘70s, when traditional genre was being returned to by that film school generation of filmmakers. Those films, while technically honoring those traditions, embodied the sense of the modern, the contemporary. It seemed like they were speaking very overtly about the political and cultural climates of their time. I really liked that. I felt like that was my sort of ambition with taking this on when I did, to talk about now through that framing device. So I was really looking at the way that changed those genres and took them into something relatable and using a very heavy cinematic language.

I heard someone speculate the other day that more people saw the first few episodes of “Mildred Pierce” than the entire number of ticket-paying audiences who saw “Far From Heaven” during its initial theatrical run. And that was your biggest box office hit!

Even still, I heard that the ratings for “Mildred Pierce” were disappointing for a television drama with a major star. I mean, they’re not comparable and I never set out to reach the biggest number of people in my work. That’s not what motivates me as a filmmaker. And yet “Far From Heaven” might have been my biggest onscreen crossover film, and that was gratifying for me at the time but definitely not something I set out to do. It was really surprising because I wasn’t being squeamish or tailoring those codes of storytelling for a contemporary audience.

To me, it was a real statement that the melodrama, that form, really still works and there’s something incredibly primal about those stories and using the abstract language of cinema to tell that story. I was even really pleased with how well “I’m Not There” was received—a really difficult, complicated movie. It’s full of visual and visceral pleasures. I think it’s a fun movie to watch, but it’s not a simple structure for today’s audiences. I feel like we’re becoming less curious as mainstream viewers of film, less open and excited by deviations and experiments. People really want to feel in control of their narrative experiences. That just wasn’t the spirit of cultural connoisseurship that I got into during my coming of age, during college. It’s a little more conservative culture now. So to get a supportive critical reaction and a passionate following—I definitely don’t take that for granted.